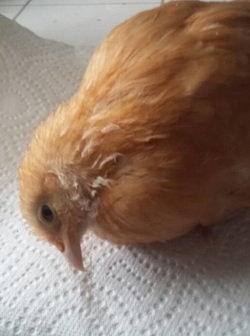 Wry neck in chickens
Wry neck Syndrome (also called torticollis) in chickens or other birds can be detected and treated and the treatment works in most cases but unfortunately, it does not work in all of them. First put the affected bird in a cage near the other chicks or adult birds she was with so your bird does not suffer from depression from being separated from the flock. This will reduce separation anxiety and make it easier to reintroduce your chicken back to the flock once recovered.
Causes
Wry neck syndrome is usually caused by a vitamin deficiency, particularly vitamin B1. This is why you should always give your chickens and particularly, baby chicks electrolyte and vitamin supplements daily with their chick starter feed. Some studies indicate that it could be a genetic defect and some believe that it is only found in some breeds of birds, most commonly Silkies and Polish breeds as it has been speculated that the Silkies and Polish chickens have heavier heads due to their surplus of plumage on top of their heads but this is just speculation.  However, as you can see from our experience, with our little Buff Orpington, wry neck can occur in other breeds as well. There is also the possibility of an injury. (Survival rate is less likely, if the bird has a broken neck). However, this little Buff has all of the symptoms associated with Wry neck and has made a complete recovery. I was able to detect the problem early and treated it with vitamin supplements.

A Vitamin B Deficiency in Chickens causes Wry Neck With these Symptoms:

Usually baby chicks and sometimes adult chickens can develop a twisting of the neck caused by a vitamin deficiency which makes it difficult if not impossible for the bird to eat.
A vitamin B deficiency in chickens can cause: "This condition can happen with other types of birds and animals as well, due to a vitamin B deficiency" (Burgos, S, 2006). Thiamin supports cognition, digestion, energy, the nervous system and more.

Vitamins are an essential part of poultry nutrition. When chickens and other poultry are lacking in vitamins it has adverse effects on normal physiological functions.
"Their essentiality in poultry nutrition is evidenced by diverse deficiency symptoms that manifest when they are lacking. They are intimately involved in a series of roles in organisms as antioxidant molecules, modulators of gene transcription, biosynthesis of neurotransmitters and nucleic acids, drivers of cell division, organ development and embryogenesis, all of which contribute to normal neural function. In poultry, a single or collective vitamin deficiency can induce neurological ailments such as peripheral neuropathies, paralysis, ataxia, areflexia, encephalopathy, opisthotonos, impaired locomotion and convulsions" (Burgos, S, 2006)..