It took me awhile to get an update on our new ducks at Chicken Heaven On Earth but here they are. Have not thought of names for them yet. These ducks will not be adopted out.  I have discovered a way to keep ducks from mucking the chickens water (using poultry water cups and a barrel) but have yet to figure out how to stop the chickens from drinking from the duck pool without separating them. They all roost in the same coop and since the ducks have been roosting with the chickens there have been no predator attacks on my small coop which I suspect is because the ducks will make such a ruckus the predators get scared and leave. Here are my new baby ducks taking their first swim in a dishpan. Too cute.

The Duckling with two mothers 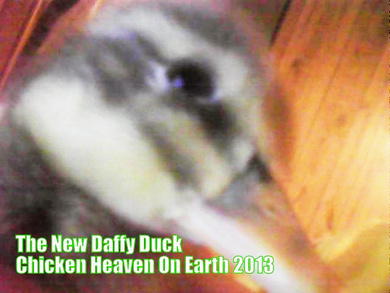