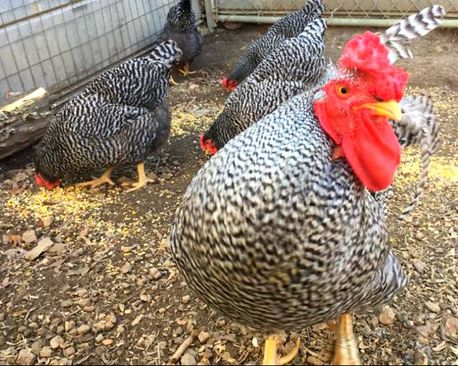 Dominique Chickens For Sale at Dalton Backyard Farms. https://www.facebook.com/wesalechicks/
Dominique chickens are  not only unique and beautiful but they are also one of the oldest Heritage breeds in the U.S.  Dominique's are cold hardy birds with docile, sweet personalities.  They are listed on the Livestock Conservancy Conservation Watch List as birds which could become extinct due to peoples lack of interest in them, old breeders who generated public interest in the breed are deceased, or many people are having a hard time finding a reputable breeder.  Rearing and raising Dominique Heritage chickens could help preserve this breed. Dominique's are great foragers  (if they are free range pastured chickens)-which means-it costs a bit less to feed them. 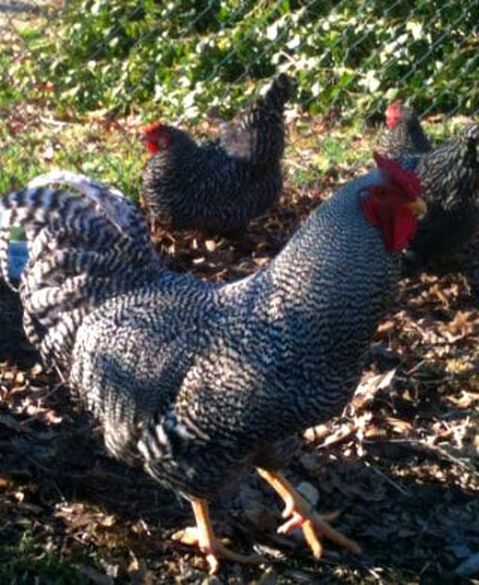 "Old poultry literature has references to Dominique's as existing since about 1840-50, and makes particular mention of certain stocks whose history was known as far back as 1820-25".  The Dominique's of this time period were quite  different from our modern Dominique because most of them had single combs. Both the single and rose comb varieties  competed in the same classes back then. The New York State Poultry Society changed this in 1870, when they decreed  that only the rose combed birds were to be recognized as Dominique at their exhibitions. From that time on the single combed Dominique's were then developed as the Barred Plymouth Rock (2). See Barred Plymouth Rock
Barred Plymouth Rock Breed Information 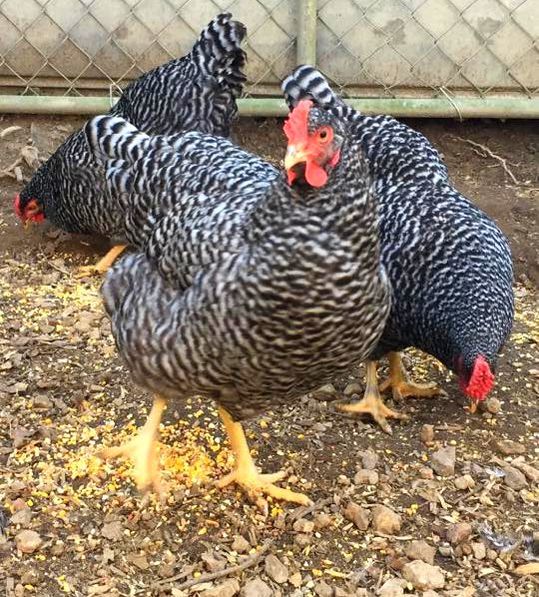 Dominique Hens at Dalton Backyard Farms. https://www.facebook.com/wesalechicks/
According to the American Poultry Association there is no reliable data regarding the origin of the American Dominique Chicken breed. ​However, they surmised these birds were probably selectively bred from
"the many hawk-colored or gray fowls kept in the New England States long before any poultry standards existed. The type of the breed indicates composite blood lines, possibly of the Asiatic and Hamburg breeds" (APA, 3).
The Dominique chicken breed is said to have originated in the United States during the colonial period and is considered as America's oldest breed of chicken. It is also quite possible that they were descendants of chickens which were brought to New England from Southern England during colonial times, (Wikipedia. 1).
"The exact origin of the breed is unknown, although their initial creation may have involved European chicken breeds and later in its refinement, some Asian varieties. The name of “Dominique” may have come from birds that were imported from the French colony of Saint-Domingue (today known as Haiti) and which are thought to have been used as part of the development of the Dominique breed..."The Dominique enjoyed popularity until the 1920’s at which time interest in the breed waned due to the passing of aged, long-time Dominique enthusiasts and breeders. The breed managed to survive during the Great Depression of the 1930’s due to its hardiness and ease of up-keep. By the end of World War II as industrial poultry operations began to take a foothold in the U.S., the Dominique once again experienced decline. By 1970 only 4 known flocks remained, held by: Henry Miller, Edward Uber, Robert Henderson, and Carl Gallaher. Through the effort of dedicated individuals the remaining owners were contacted and convinced to participate in a breed rescue. From 1983, following published reports on the breed by The Livestock Conservancy, until 2006, Dominiques steadily rose in numbers. As of 2007, it has been observed by the breed’s enthusiasts that numbers are once again beginning to decline, as old time breeders of Dominique age and are no longer involved with keeping and promoting the breed". (Livestock Conservancy, 5). See more information, video, photos, and where to buy Dominique chickens below. 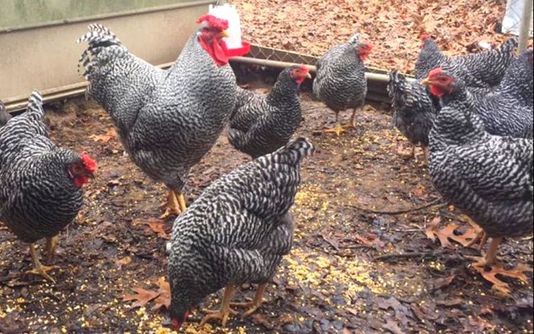 Featured Video: How to tell a Barred Rock From a Dominicker

Question: What is the difference between a Barred Plymouth Rock Chicken and a Dominique (Pilgrim Fowl) Chicken?
Answer: Barred Rock chickens and Dominique (also called Pilgrim fowl or Domineker) do not have the same color pattern on their feathers and  their combs are different. The Dominique has a rose comb whereas a Barred Rock has a straight comb. Though their plumage (feathering) color may seem the same, there is a distinct difference between the barring pattern. A Dominique barring pattern is known as Cuckoo pattern which is not as clearly defined as the crisp distinct barring on barred varieties of chickens. The under color of the cuckoo pattern is whitish in color and in barred varieties it carries clear through the skin (2).
​Question: How did Dominique chickens get their name?
Answer: "The name "Dominick", "Dominique", or "Dominica Fowl" was commonly given to gray or blue-barred chickens...Some have supposed that "Dominick" came from "Dominie" (a preacher or teacher), and that the name was first given to a flock of cuckoo patterned birds that belonged to a certain dominie. Others have tried to associate the name with "domino", because the color pattern resembled the spots on a domino. All that is known about the matter is that the name "Dominick" was first applied to any "hawk colored" or cuckoo chicken, which had no distinguishing body shape or uniform comb features and fell short of the definition of a breed. By the 1840's these cuckoo birds were bred with a little more care and the stock began to develop definitive characteristics. It was then that the names "Dominique" and "Dominica Fowl" began to be used" (2).
Question: What is a Barring Gene found in Barred Rock, Dominique, and other chicken breeds?
Answer: The sex-linked barring gene of the chicken (Gallus gallus) appears in the adult bird's feathering as an alternate pattern of white and black bars and was first identified in 1908 (2). The barring gene gives an absent of color which appears as white (having no pigment) and gives the appearance of bars on the feathering.
Question: Do Dominique Hens go broody (set on eggs to hatch them)?
Answer: Dominique hens rarely go broody but they are good egg layers. 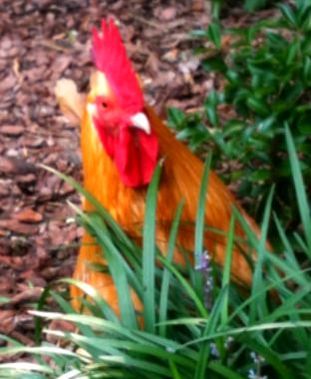 Dalton Backyard Farm. https://www.facebook.com/wesalechicks/
If you are looking to purchase high quality Dominique chicks this is the place to go. Dalton Backyard Farm poultry is carefully selected from well kept stock in backyard flocks. They do not purchase breeder stock from hatcheries. All chicks are hatched from their own breeding flocks which are antibiotic and hormone free. They are fed high quality poultry feed and are allowed to forage the yard during the day and safely cooped at night.
How to contact Dalton Backyard Farm:
Address: 345 Forrest Hill Cir SW
Dalton, Georgia
Facebook Page: https://www.facebook.com/wesalechicks/
Email: DaltonBackyardFarm@wesalechicks
Phone number: Call (706) 537-0525