Proof of chicken intelligence, agility, cognitive abilities, training, relationship development between humans and other chickens, and more! Previous studies indicated chickens were as smart as primates and human children under the age of 5 but recent studies show that chicken intelligence has advanced to that of a human 7 year old. 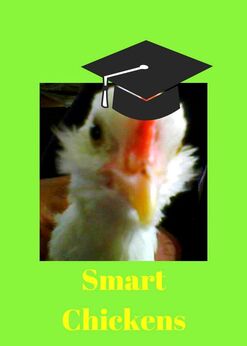 Chicken Intelligence. Photo of Mr. Snowie CHOE
The following is a unique collection of studies about chicken intelligence with the hopes that people will have a new found respect for the long misunderstood chicken. Chicken intelligence has long been underrated and new reports show that they have the intelligence level of small children or primates.
​Chickens are so smart they can even learn to do tricks. (We know because ours can play dead, play climb the ladder, come when called by name-even without food as a lure, like to be petted, and try their best to talk), so it was interesting to find out that other people have very smart chickens too. Dr. Chris Evans, Professor of Psychology at Macquarie University, Australia states:
“Chickens exist in stable social groups. They can recognize each other by their facial features. They have 24 distinct cries that communicate a wealth of information to one other, including separate alarm calls depending on whether a predator is traveling by land or sea. They are good at solving problems. ‘As a trick at conferences I sometimes list these attributes, without mentioning chickens, and people think I’m talking about monkeys," FInd out more about training chickens and read the article, "Chickens vs Dogs as pets".
That's right! Chickens can solve problems
As anyone who has had pet chickens can tell you chickens can find ways to solve their problems and live in family groups, establishing a pecking order to determine rank. Scientists are studying chicken behavior patterns and proved that chickens recognize facial features, live in stable groups, have separate alarm calls, and even have problem solving skills as presented by Dr. Chris Evans, Professor of Psychology at Macquarie University, Australia.
(Retrieved from: http://cok.net/inv/pilgrimscfi/intelligence/)
​Studies show that chickens are:
Highly intelligent
Can feel pain
Respond to human interaction
Observe something before they decide what to do
Love attention
Learn quickly
Have distinct personalities
Live in interactive social groups
Can identify facial features
Have separate alarm calls
Good at problem solving
​Can communicate with people and each other
Can see colors better than humans
Can discern between different shapes and patterns (See how chickens  See Color link below)
Can be trained to follow a light pattern to produce music
​​Chickens can communicate with each other and you, have family structures, have amazing cognitive abilities which are more advanced than dogs, primates, and small children
Reference: