Seeing the world through a chickens eyes is very different from how humans see things. The world is much brighter through a chickens eyes and studies show that they even prefer certain colors more than others. Studies show even newly hatched baby chicks have color preferences as the chicks chose the color orange over the color blue.
9 Day old chicks preferred the color red over green.
Baby chicks responded strongly to chromatic colors of orange, turquoise, and purple (Ham, 2007).

Why Chickens See Color Better Than People Do 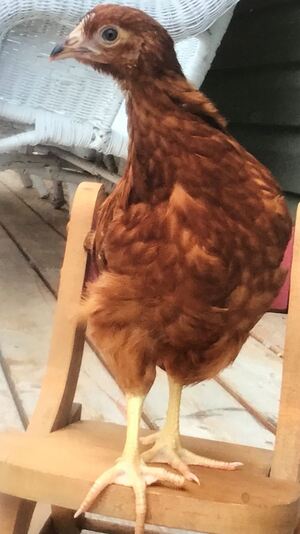 Photo of "Spirit" the hen submitted by Tracy McTaggart.
The reason chickens can see colors better than humans is because they have five different kinds of light receptors in their eyes which are organized into a mosaic type structure giving the chicken the ability to see colors in all parts of the retina located in the back of their eyes.
​"Based on this analysis, birds have clearly one-upped us in several ways in terms of color vision," said study author Dr. Joseph C. Corbo of Washington University School of Medicine in St. Louis, Mo. "Color receptor organization in the chicken retina greatly exceeds that seen in most other retinas and certainly that in most mammalian retinas."
All people and animals have rods and cones in the retina of the eyes which work as light sensitive photoreceptors. Rods provide night vision and cones in the eye provide daytime vision. Birds have more cones in their eyes than mammals. According to Corbo, "The human retina has cones sensitive to red, blue and green wavelengths,including some ultraviolet, and a specialized receptor called a double cone that we believe helps them detect motion, said Corbo. He speculated that this extra sensitivity to color may help the birds find mates. (You may have noticed that when it comes to birds the males almost always have more colorful plumage than the females) and their natural attraction to bright colors makes it easier for them to find colorful fruits and berries to eat (Live Science, 2010). A chicken's eyes act independently of each other, which is why they make avid insect, mouse and frog hunters. The right eye looks for food while the left eye watches out for predators or other prey.
How Chickens React to Colors & Shapes
References:
​1. Ham, A.D. and Osario. Colour preferences and colour vision in poultry chicks. Proc Biol Sci. 2007 Aug 22; 274(1621): 1941–1948.
Published online 2007 Jun 5. doi:  10.1098/rspb.2007.0538
PMCID: PMC2275181.​https://www.ncbi.nlm.nih.gov/pmc/articles/PMC2275181/
2. Chickens see color better than humans. (February 17, 2010 03:44am ET). Live science. https://www.livescience.com/8099-chickens-color-humans.html