Reasons why people abandon chickens and what to do if you decide you don't want your chickens anymore. Don't just abandon them. That is a death sentence for a chicken.  There are bird and animal sanctuaries every where. If there isn't one in your area, call your local animal shelter. The following information is what I have learned from owning Chicken Heaven On Earth Rescue Sanctuary for 15 years. Many times, I have been called to come get a stray chicken found in someone's yard, on their porch, or simply wandering down the street, called to rescue chickens who were being chased by children and teenagers who were throwing stones at the birds or to help chickens run over by cars, attacked by neighborhood dogs, cats, and wild animals. I have been called to rescue chickens whose owners were no longer able to take care of or could no longer afford to feed the birds, and in many cases people called me because their rooster has turned mean or because the town they live in does not allow roosters. It is hard to find a chicken rescue sanctuary and many backyard chicken keepers do not know farmers that could take their chickens if they cannot keep the birds anymore and in their frustration they end up dumping their chickens somewhere which is a huge mistake. Chickens dumped in the country end up being meals for wild animals and chickens dumped in the city suffer from horrifying dangers as well. Only in rare instances do abandoned birds survive and usually this is because someone rescued them. 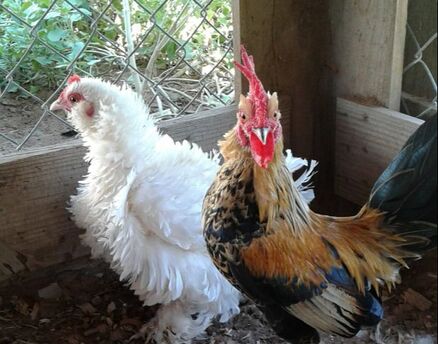 Mr. Sweet Pea (unwanted rooster) and Lil' Snowball born at Chicken Heaven On Earth. 2018
They do not know how to take care of them.
The baby chick grew up to be a rooster and they only wanted hens.
Their rooster turned mean.
Can't afford to feed them.
Animal control threatened to fine them.
They think they are setting the bird "Free"
The owner was sent to a nursing home
Owner passed away with nobody to take over care of the chickens.
​The owner went to jail
Oftentimes, people purchase baby chicks because they think they are cute and give them to small children for pets. More often than not they have no idea how to take care of the chick and they often die due to mishandling, being stepped on, or from getting them wet.  Incidences like these, happen most often during Easter.
The few that survive, often turn out to be roosters because that is what they sell during the Easter holidays, rather than killing the male chicks discarded from the commercial egg industry and from hatcheries. The male baby chicks get a reprieve.
However, when many backyard chicken keepers realize they have a rooster (because it starts crowing), they do not know what to do with it, some find themselves with more than one rooster and not enough hens, then the roo's start fighting among each other, some roosters become aggressive due to high testosterone levels which makes the owner not want them anymore, and last but not least, many people who live inside city limits are not allowed to have roosters.  Sadly, many people don't even try to get someone to take the rooster they just "set him free" thinking they are doing the rooster a favor. They are not doing him any favors because more often than not the rooster will be attacked by neighborhood dogs, cats, other wild animals, and even children. Some get run over by cars while others are murdered by predators, like possums, skunks, snakes, foxes, hawks, or raccoon's that may be roaming around. "Setting a chicken free" is nothing less than a horrifying death sentence for the bird. In some instances, abandoned chickens have been known to survive, thrive, and have become a major problem for some cities who then capture and euthanize the birds.
If you find a homeless chicken
If you see an abused, abandoned, or neglected chicken, try to catch them but do not chase them because they are probably already stressed or hurt. Watch where they go in the evening. They will find a place to roost. Once it is dark you will be able to easily grab them and cage them.
Small bits of food will easily lure them too you and you can gently pick them up if they are tame. You can put them in a cage or your yard if there is some type of shelter for them, such as an unused dog house with a cage, or put them in a box with food and water, until you can get some assistance.
The next thing to do is feed them and give them fresh water as they are probably very hungry.
If you decide to keep them, you should make sure that you know how to take care of them you can visit our pages:
Taking care of chickens-for beginners and Chicken Care.
If you decide not to keep the chicken or chickens you should
contact your local ASPCA or animal shelter.

Don't Just Dump Your Chicken At An Animal Sanctuary

Please, If you bring your chicken or other animal to a sanctuary or animal shelter it is important that you make arrangements for someone to get them from you. Do not just dump them over the fence line. There may be other animals on the property that could consider them a threat and kill them. You would not believe how many people have simply thrown their chickens, cats, etc over our fence line. As a result, some roosters were found injured or dead when the other roosters who live here attacked them. Someone threw a dog over the fence. My donkey protects the flock, he takes any intruder as a threat. The dog was nearly stomped to death before anyone could get to it.  Hens who do not belong to the flock can get attacked by other hens. Rabbits could quickly get eaten by cats. The donkey and dogs will go after cats and kittens who do not belong to their "pack". Never Never Never just dump your pet. Please.
Rescued Chicken Stories