Solar Nite Eyes is an easy way to help protect your chickens from animals and birds that could harm or kill them by fooling predators. Watch our featured video product demonstration to see how it works and get best buys on solar nite eye protectors. This works great when used with other predator protection methods, such as solar powered electric fencing, poultry netting to cover the top of the coop, and hardware cloth to cover all openings on your chicken coop. The trick to using them successfully is to place some low to the ground trying to imitate the eye level of a predator and to place some higher to deter hawks and owls. 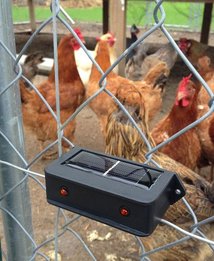 Solar Nite Eyes - Predator Protection System
From Solar Nite Eyes
The concept is simple, but it WORKS! Predators believe the flash to be the eye of another animal and feel threatened, so they stay away. Multiple unit locations are most effective. Units are completely sealed, protecting against moisture and are high/low temperature resistant. Red flashing LED lights automatically turn on at dusk and off at full daylight. When used properly your unit will work for up to 5 years without battery or lamp replacement. Protects against owls, coyotes, opossum, raccoons, fox, bobcats, muskrats, bear, cougar, wild boar, mink, weasels and many more nocturnal predators. It is often recommended that 4 units are used and deployed in a 360 Degree format to keep approaching Predators at bay from each direction. See video below...

Best Ways to Protect Your Chickens From Predators