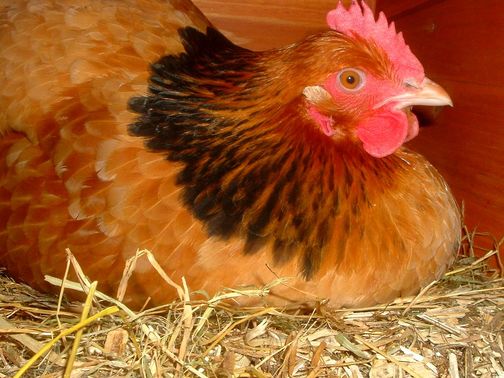 Just because your hen lays an egg in her nest box does not mean she is happy with it.  Studies show that a hen who doesn't like her nest box will not sit in it as long as a hen that likes her nest. In their experiment conducted on 996 hens, it was assumed that hens who were given cages with two surfaces either with curtains closed and opened would choose the closed curtains and their findings concluded that hens had less "pre-laying activity and aggression"  and appeared more settled when given a nest box with simple plastic curtains. When given a choice between a nest with a red curtain or an open nest more hens chose the nest box with the curtain. ​(Hunniford, M., & Widowski, T. (2018). 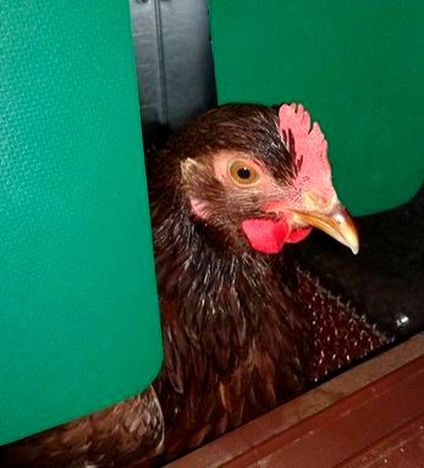 Our Favorite Roll Out Nest Box. All our girls fight over it so we are getting more..lots more.
Roll out Nest Box with green curtains VS Open Nest:
In my comparison, the girls have their choice between the two boxes. The open nest box with hay for bedding has no roof but has 3 sides. The Roll out nest box has a roof and green curtains as well as a plastic grass nesting pad. In the 4 months I have tested it so far, only one hen uses the open nest, all of the others preferred the Roll out nest box.
Roll out Nest Box with green curtains VS Tidy Cat Nest Box:
In this comparison the girls were given their choice between the two boxes and the open nest boxes were also still available. Not one hen laid an egg in the open nest box in the past year. For the first week only one hen used the Roll out nest box. All of the others still preferred their Tidy Cat nest box. After 2 weeks and 4 days 4 hens were laying eggs in the roll out nest box. After one month (30 days) all but 15 older hens were fighting over the roll out nest box. Hens who couldn't wait (but were definitely standing by the roll out boxes waiting to get in) ended up laying their eggs in the Tidy Cat nest boxes as a second choice. Not one hen used the open three sided nest boxes after that.
Update: I gave ten hens two nest boxes. One was a Roll out nesting box (the one pictured) and the other was a regular nest box with plastic curtains made from an old table cloth. My experiment lasted for one month (30 days). Only one hen used the regular wood nest box with curtains. All of the others preferred the Roll out nest box. No I am not getting paid to advertise their nest box and they most likely don't even know I have posted this about it, but my hens preferences were so obvious I just had to share them with you.
Update: After 2 years of use-My hens have many nest boxes to choose from and they still like this roll out nest box the best.
​Hunniford, M., & Widowski, T. (2018). Retrieved April 2, 2018 from Curtained nests facilitate settled nesting behaviour of laying hens in furnished cages. Applied Animal Behaviour Science. doi:10.1016/j.applanim.2018.01.016. ​http://www.appliedanimalbehaviour.com/article/S0168-1591(18)30036-4/fulltext