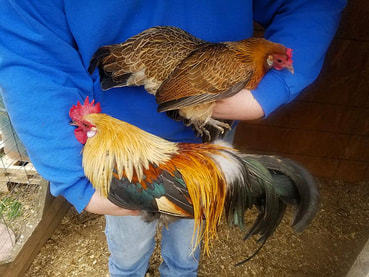 Photo courtesy of Bonnie Morgan.
Origin of Phoenix Bantams:
Phoenix Bantams originated from imported Japanese Bantams and European attempts to obtain a long tailed working breed chicken. "The first president of the National German Poultry Association, Mr. Hugo du Roi, is credited with the creation of the Phoenix breed...The long-tailed birds imported before 1900 represented a small population of chickens with delicate constitutions. Mr. du Roi made the decision to outcross to try and invigorate this small population and keep alive long-tailed fowls in Europe" (Livestock Conservancy).
Phoenix Bantams closely resemble the Onagondori chicken breed whose tails grow to be 12 to 20 feet in length.
Phoenix Bantam hens can lay between 200 and 300 eggs a year which makes them excellent egg layers. "
Appearance: Phoenix Chickens have wide sickle shaped feathers and tails which can grow from 2-5 feet in length.
Egg color: White or lightly tinted brown.

Phoenix Bantams Accepted into the American Poultry Association are:
Golden Phoenix
Silver Phoenix
Personality of Phoenix Chickens:
Some sites say Phoenix chickens are "unfriendly" but in my experience the Bantam Phoenix have been very friendly. Phoenix Bantams tend to be calm and adapt readily to handling whereas their larger counterparts can be somewhat flighty. They love attention and some can fly very well which is a benefit for their protection. The roosters plumage is a vibrant gold color that turns to lighter shades as it reaches the tail feathers which are almost black in color with  opal hues of green and turquoise.The tail feather's usually will grow out to be almost floor length.
However, the hens are less colorful and tend to be smaller, sturdy, friendly to humans that they regularly come in contact with. The hens can fly when they are young but as they reach maturity they tend to gain weight and this prevents them from having the ability to fly. They lay a small egg. Approximately, one inch long and and 11/2 in. in diameter.
These birds are hearty and tend to resist most disease and fungal diseases that plague many other breeds.
References:
​Phoenix chicken. Livestock Conservancy. https://livestockconservancy.org/index.php/heritage/internal/phoenix