Easy to understand information, photos, and videos of chicken anatomy, name and function of body parts, skeletal structure and purpose, reproductive tract information and surgeries. (See below) plus get best the best buys on chicken anatomy 4D models and books.

Name and Function of Body Parts of Poultry (Chickens) 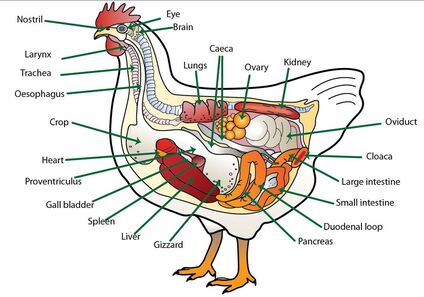 Dorsal: Upper surface of the bird.
Ventral: The lower and abdominal surface.
Cranial (or anterior): The front or head.
Caudal (or posterior): The tail or rear.

The Basic Body Systems of Poultry

Integumentary:
Skin, feathers, beak, scales, and plumage.
​
Respiratory:
The chickens respiratory system is described as tidal because air goes in and out like the tide.
Birds do not have a diaphragm to inflate and deflate their lungs like mammals do but they do have 9 air sacs in the neck region and body cavity that function to inflate the lungs.
​A gas exchange functions to move air in and out of the respiratory system.

Skeletal:
Chickens have pneumatic bones which are connected to their respiratory system, medullary bones which store calcium to produce egg shells, and fused bones. Find out more here: Images and Information About The Chicken Skeleton

Digestive:
Food enters through the mouth, to the esophagus which connects the mouth to the crop where food is moistened and stored temporarily before entering the stomach of the bird where acids and enzymes will break down the food before entering the gizzard which acts as teeth by grinding the food for easier digestion before reaching the small intestine where the nutrients from food are absorbed.
​Food then enters the two terminal Ceca pouches which ferments leftover food particles and water before entering the colon (large intestine) which is used for water absorption.
When leaving the colon it enters the cloaca where feces and urine exit through the vent.
The liver produces bile to digest fats to store in the gall bladder and the liver stores and metabolizes fat and fat soluble vitamins. The pancreas produces insulin used in carbohydrate digestion.

Circulatory:
The heart removes carbon dioxide and metabolic waste from the birds tissues as it pumps nutrients to tissues through oxygenated red blood which is pumped through the arteries from the heart to the lungs and to various parts of the body while depleted blue blood is returned for recycling through the veins. Capillaries function as an exchange between blood and tissues.
Arteries-Carries blood from heart & to the rest of the body.
Arterioles-Directs blood to certain tissues of the body.
Capillaries-Site of exchange between blood and tissues.
​Veins-Brings oxygenated blood back to the heart.

Urinary:
Birds do not have a bladder which is where urine is stored so their urine is excreted as soon as it is produced.
The kidneys (two multi-lobular structures located in the rib cage) remove waste products from the blood.
Ureters transport the filtered liquids from the kidneys to the cloaca for excretion.
​The urine excreted by poultry contains uric acid which is very high in nitrogen due to it's low water content and it is semi-solid.

Reproductive:
Male-Two testes located internally in the body. The Ductus Deferens deliver semen from the testes to the phallus. Rudimentary phallus is an internal protuberance. Poultry do not have an external penis.
Female-Female poultry only have one functioning ovary and this is usually the left ovary.
The oviduct produces albumen (egg white), the shell membrane, and the shell around the yol. There are five regions:
Infundibulum-Location of conception where the male and female gamete (organs) come together
Magnum-Produces the albumen
Isthmus-Produces the inner and outer shell membranes.
Uterus-Plumps the egg, forms the cuticle and the shell basically sealing the pores of the egg shell and this is where the shell pigment is developed.
Vagina-Produces some cuticle, regulates egg production timing (21 days) and expels the egg (Anatomy and Physiology of Poultry).

Photo Courtesy of Osprey. http://ospreys.weebly.com/respiratory-system.html
Birds breath in and out through their nares (the nostrils located on their beak).
When a bird inhales (breathes in) the air bypasses the lungs and goes into the posterior air sacs and at the same time the air from exhaling exits the lungs and enters the anterior air sacs.
When a bird exhales (breathes out) the air is released from the posterior air sacs and enters the lungs. Then the air that filled the anterior air sacs while inhaling is released from the body through the trachea (Anatomy and Physiology of Poultry).
Referenced Articles:
Anatomy and Physiology of Poultry. Retrieved on Aug. 29, 2020 from https://www.uspoultry.org/educationprograms/PandEP_Curriculum/Documents/PDFs/Lesson11/PoultryAnatomyandPhysiologyPres.pdf
​​
Avian Respiratory System written by Dr. Jacquie Jacob.(May 05, 2015).http://articles.extension.org/pages/65375/avian-respiratory-system