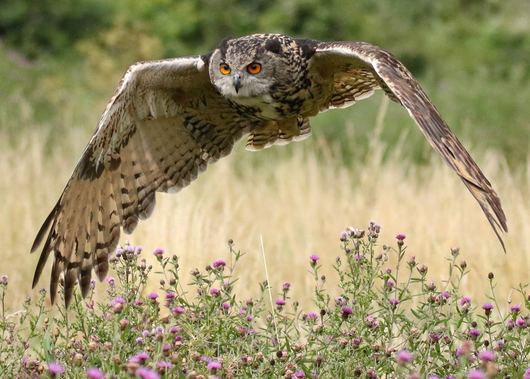 Owl going after it's prey. Photo by Gunilla S-Granfalk on Unsplash
Owls generally hunt at night but occasionally these beautiful but adept predators can be seen lurking around in the daylight. They have a very sharp beak and razor sharp claws that can rip a chicken apart very quickly. An owl will eat the heads and innards of roosting hens or roosters.  Owls will not usually attack during daylight hours unless food is very scarce. There have been many reports of attacks during the night and  right at dusk. A hungry owl can silently and quickly carry off a chicken or snatch small chicks, dogs and even cats, though their main diet consists of rodents and snakes.
Allowing chickens to roost outside or in outdoor pens that are uncovered and unlocked is a good way to put your chickens in harms way or to be brutally attacked, mutilated and murdered by owls and other predators. Find out what kind of predatory birds are in your area.
Fake Owls can be used as a decoy
Fake Owls can be used but will usually only work one or two times. Owls are smart and quickly figure out that the fake owl is not real.
Setting traps does not work for three reasons
Owls will not usually approach an area where humans are wandering around and they like to eat their food while it is still alive and struggling.
Owls like to hunt from a high place (trees, fence post or roofs), swooping down to capture their intended meal. It is illegal to kill an owl in most places.
Keep your chickens in an enclosed area
During the day when chickens are free to roam, keep your chickens in an enclosed area with some type of covering, such as chicken wire, mesh or plastic. Poultry netting works for smaller owls and hawks but can do little to stop a large barn owl. Chicken wire or hardware cloth has a better chance of keeping barn owls, eagles, falcons, large hawks, and other large predatory birds away from your chickens.
Plastic bags attached to trees or sticks
​Plastic bags move with the wind and can deter an owl that may be nearby stalking their prey. Bags should be changed weekly as they can deteriorate and come loose. Chickens can easily get their feet tangled in loose flying bags.
Best Bet for protecting your chickens from owls
Keep your chickens in a securely locked door at night and in an enclosed (fence, chicken wire, mesh)covered pen during the day. It is a good idea to keep an electric fence around your coop going all the time. An electric fence or electric poultry net will zap any predator that tries to get past it. However it would be quite difficult to put electric poultry net over the top of the coop but not impossible. I use the Bird X Ultrason Repeller and it does a great job of keeping owls, hawks, skunks, raccoons and snakes away from my coops. See best buys on poultry netting, chicken wire and more ways to protect your chickens from owls below.
Bird-X Ultrason X Ultrasonic Bird Repeller, 4-Speaker Professional System Covers 3,600 sq ft Coverage

Scare X Balloons Work to Scare off Owls and Hawks 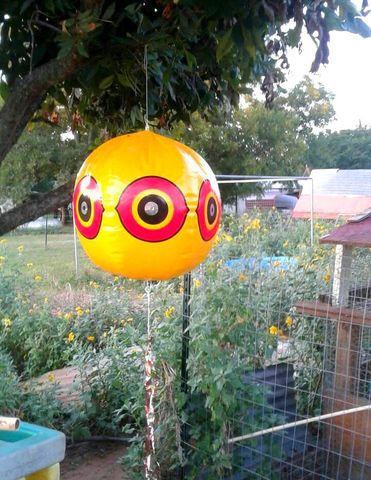 One of the Scare X Balloons I use. They come in a pack of 3
I use Scare X balloons and they do work to keep hawks and owls away but they have to be repeatedly aired up about once a week and moved because one hawks and owls realize the balloons only move in a limited area they are smart enough to get around them. This balloon has been up about a week when this pic was taken. It does keep predators away. The reflective streamers hanging off the bottom lasted about two weeks but I have since replaced it with reflective Scare tape. See more ways to get rid of owls below.

I have a couple roosters who like to perch in a tree that sits next to my chicken coop trailer, they are too high up for me to get them down or to cover them with poultry netting so I  purchased some solar powered nite eyes and placed them in the tree, all around my hen house, coops and runs along with my Bird X repeller, and have had zero incidences of owls snatching my chickens any more, even though I can hear them hooting every evening they will not approach my tree roosting roosters anymore. Check out the solar night eyes here: Go to Solar nite eyes.