What is Ascites Syndrome?

Ascites Syndrome is a condition where fluid builds up in the hepatic (areas relating to the liver), peritoneal areas (smooth transparent serous membrane that lines the cavity of the abdomen) or in the pericardial body cavities (a double walled sac which contains the heart and roots of the great vessels). According to Poultry Health Services, Ascites syndrome cannot be transmitted or spread from bird to bird. 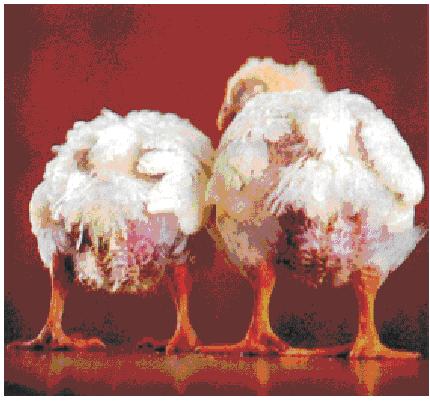 Redness on the abdomen area indicates these young broiler hens are suffering from ascites syndrome. Photo Courtesy of http://holybejo.blogspot.com/2011/10/hidrops-ascites-problematic-and-problem.html
Sodium
Lung damage
​Liver damage
Increased vascular hydraulic pressure
Vascular damage
Increased tissue oncotic pressure
​Decreased vascular oncotic (usually colloidal) pressure
Venous hypertension resulting from right heart failure in response to increased pulmonary resistance.
Most Common Cause of Ascites ​Pulmonary hypertension-Chickens living in high altitudes often get this because they are not getting enough oxygen which causes excessive pressure on the pulmonary arteries which reduces the blood flow to the lungs. This added pressure causes stress to the right ventricle which causes dilation and hypertrophy on the right ventricular wall, valvular insufficiency, RVF, and ascites. Meat birds need more oxygen than other chicken breeds and when they are reared in low altitudes can develop pulmonary hypertension due to a decrease in pulmonary capillaries which surround and embrace the lungs.  ​Scroll down to find out more about this topic, see photos etc.
​WARNING-Graphic images of autopsied chickens at the bottom of the page.

Factors that Increase the Demand for Oxygen in Bird Lungs

Bird lungs are rigid and fixed in the thoracic cavity which means there is very little room to allow for the increased blood flow that occurs when the capillaries expand. Meat birds are particularly more susceptible to Ascites as they grow because they grow faster than other chicken breeds. The increased blood flow causes pulmonary hypertension and cor pulmonale, RVF and ascites in broiler chickens due to oxygen demands caused by exposure to cold which reduces the amount of oxygen that can be carried through the blood. Acidosis and carbon monoxide increases the blood volume, narrows or blocks the capillaries which interferes with the blood flow needed in the lungs which can increase RBC rigidity, polycythemia with increased blood viscosity which often results in flock outbreaks of pulmonary hypertension syndrome (with or without ascites).

Pulmonary hypertension syndrome is less than 2 percent in some broiler flocks and can be as high as 15 to 20 percent in roaster flocks due to right ventricular hypertrophy which causes the increased workload in blood flow which leads to RVF if the pressure persists.

Clinical findings:Scroll down to find out how to prevent or stop Ascites Syndrome and see Autopsy results.

How to Control Ascites

Reduce bird's metabolic oxygen requirement by slowing the growth rate. Research has demonstrated that broilers can be genetically selected for both resistance and susceptibility to pulmonary hypertension syndrome and associated ascites (Dr. Billy M. Hargis)". See Video & More Below...

Results From Autopsies of Chickens & Poultry Affected with Ascites Syndrome