Oregano used as a treatment for necrotic enteritis in chickens 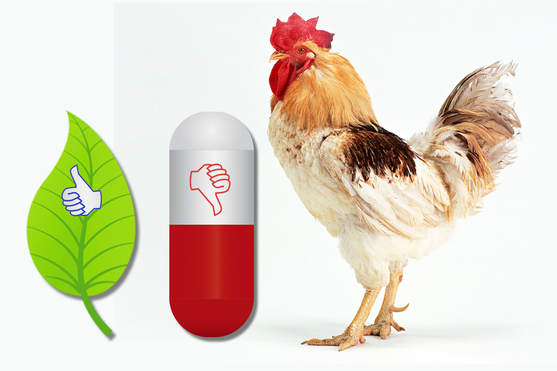 Photo Courtesy of Plus Vet Animal Health. http://www.plusvet.eu/can-plant-extracts-replace-antibiotic-growth-promoters/
Inhibit growth of pathogens in the gastrointestinal tract.
Efficient feed utilisation
Better nutrient absorption
​Enhanced growth rates
Prevents pathogens from causing gastrointestinal tract disease.
​Antibiotic growth promoters do not have these benefits in gnotobiotic animals which have no gut microbiota present in their intestines. The bacteria must be present for the antibiotic growth promoters to work.

Phasing Antibiotic Growth Promoters out of the Poultry and Livestock Industry

Safer alternatives are being researched and used to phase out the antibiotic growth promoters. Asian producers are pioneering projects to produce antibiotic free meat and eggs in an effort to prevent the development of antibiotic resistance in bacteria. 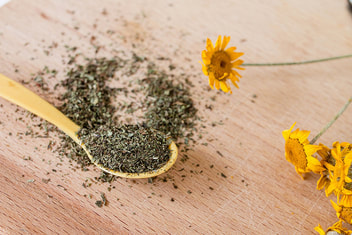 "The phenolic compounds within oregano oil, carvacrol and thymol (Adam et al., 1998) effectively kill these microorganisms, which include both gram positive and gram negative bacteria (Stiles et al., 1995) upon contact, within the gut of the animals (Sivropoulou et al., 1996). The phenolic effect is through their activity on the bacterial cell wall, by denaturing and coagulating the protein within the cell wall structure. More specifically, phenols interact with the cytoplasmic membrane by changing its permeability for cations, like H(+) and K(+). The dissipation of ion gradients leads to impairment of essential processes within the cell, causing leakage of cellular constituents, which result in water unbalance and finally cell death (Heipieper et al., 1991). In contrast to antibiotic growth promoters, there has been no evidence of bacterial resistance from using oregano oil (Ingram, 1997).
Coccidiosis is an age-old problem that can result in subclinical syndromes such as impaired feed conversion, poor flock uniformity and poor performance; or clinical effects such as enteritis, diarrhoea and even death (Ekstrand et al., 1994; Waldenstedt, 2001; Youn and Noh, 2001). Coccidiosis is considered as one of the most severe health and welfare problems in poultry that costs a huge loss to poultry producers worldwide (Stevens, 1998). The continuous use of anticoccidials and the many types of ionophores in commercial poultry-rearing has also led to development of resistance and has given rise to multiple drug-resistant strains of coccidia in the field. But now the problem can be solved by the use of oregano essential oil.
Oregano essential oil can be used to control coccidiosis in all phases of poultry production. To effectively control coccidiosis, the phenolic compounds within oregano speed up the process of the normal shedding of enterocytes from the intestinal mucosae (Ultee et al., 1999; Weber and De Bont, 1996), causing a disruption in the life cycle of Eimeria spp. and as a result, the protozoa are not able to complete its life cycle to cause either clinical or subclinical disease. Besides effectively controlling coccidiosis, the usage of an alternative such as oregano essential oil will eventually lead to a reduced usage of coccidiostats and thus prevent coccidia from developing resistance, which is a problem faced by many who still use coccidiostats to control the disease....
In a commercial field trial that was conducted in a large poultry integrator in Bolu, such an oregano-based product (Orego-Stim®, Meriden Animal Health Ltd.) was used during the withdrawal feed period. During this phase, antibiotic growth promoters and anticoccidials are excluded from the poultry feed.
Prior to the inclusion of the oregano-based product, the birds were suffering from pasty vent and blood-stained droppings, typical of a mixed coccidiosis and necrotic enteritis infection
These clinical signs were present despite the inclusion of antibiotic growth promoters and coccidiostats before the withdrawal feed period.
Oregano was able to perform its function of providing growth-enhancing and anticoccidial properties as well as having extra benefits for the birds, such as resolving the diarrhoea, reducing mortality, improving feed efficiency and increasing the performance of the treatment group. Thus, this resulted in a higher profitability for the broiler producers.
In the Philippines, Professor Marcela Batungbacal from the Institute of Animal Science, UPLB found that oregano extract (Orego-Stim, Meriden Animal Health Ltd.) was more effective in controlling oocyst production compared to amprolium. Amprolium has been found to be highly effective against Eimeria tenella and E. necatrix but less effective against E. acervulina, E. maxima and E. brunetti, but the mode of action of oregano extract was not species-selective in controlling and preventing coccidiosis.
Coccidial vaccines are commonly used in breeder operations and can usually provide adequate protection against coccidiosis. However, they may not be the perfect solution due to certain post-vaccination reactions that may occur during the 3rd to 4th week after vaccination and also the emergence of necrotic enteritis, an enterotoxaemic disease that usually accompanies coccidiosis, caused by Clostridium perfringens.
Waldenstedt (2001) investigated the effects on production and health in broilers vaccinated against coccidiosis with a commercial vaccine (Paracox®, Schering-Plough) in combination with an oregano-based product (Orego-Stim®, Meriden Animal Health Ltd.). The results of her study indicated that vaccination against coccidiosis in combination with the oregano-based product proved a better method of controlling both coccidiosis as well as necrotic enteritis.
Sweden is widely cited as the first country to stop using antibiotic growth promoters (AGPs).  In 1986, Sweden became the first European country to ban non-therapeutic use of antibiotics in response to pressure from the Swedish Farmers Union and consumers. In Sweden, the occurrence of necrotic enteritis increased dramatically following the ban. Intestinal colonisation by Clostridium perfringens not only decreases growth and feed utilization, but can also result in high mortality.
This is where the wonders of oregano come in and play its role. With the implementation of a proper combination programme, oregano-based products can safely and effectively be positioned in combination with coccidial vaccines. Clostridium perfringens is easily destroyed upon contact by the phenolic compounds of oregano essential oil. With such an application scheme, the incidence of coccidiosis and necrotic enteritis in poultry can easily be controlled and reduced effectively.
However, we must note that not all oregano products work the same. The efficacy and activity of Orego-Stim is due to the unique matrix of the components found in it, but the major components of Orego-Stim are still carvacrol and thymol, which make up about 85% of the active components. The level of carvacrol and thymol in Orego-Stim is in a very specific range. This specific ratio between carvacrol and thymol plays a major role in its antibacterial, antifungal, antioxidant and growth enhancing activities" (Dr-Justin-Tan-Yu-Wen)..