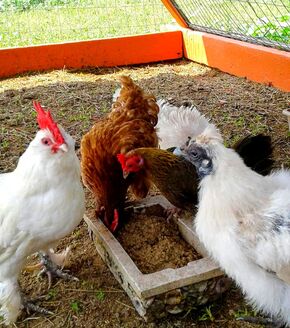 Mr. Snowie and his girls. CHOE.
A list of most common chicken predators and how to get rid of them. Keep your chickens safe with these great tips! For those of us who raise chickens, whether for eggs, meat or pets, one thought strikes fear into our hearts. PREDATORS! The best way to keep your chickens safe from predators is prevention. ​ In the past few years predator attacks on chickens are becoming more frequent and more daring due to all the weather changes, fires, natural disasters and such which has forced predators out of their natural habitats where they hunt for food. This is why there are so many recent attacks on chickens-a easy prey for predators unless you do something to stop them. Free ranging your chickens is not as appealing as it was years ago. Wild animals are migrating to rural and urban areas in droves due to lack of habitat and lack of food. Free ranging chickens without a chicken tractor is like sending an invitation to dinner to predators. I have always believed free ranging my chickens was the best option for their health and happiness but I have discovered that free ranging comes with huge risks to your birds. There is nothing healthy or happy about finding your chicken slaughtered by a predator or finding nothing but fluffs of feathers about.
An unsecured chicken coop is like handing a box of your chickens over to predators where your chickens have no chance for escape. A secure moveable hen house (chicken coop) and run offers your chickens some protection if proper measures are taken to keep predators out.  Basic predator protection your chickens should have is a secure house where they can be locked in at night, hardware cloth placed 12 inches or more out from the base of coop and run, dim lighting inside the coop at night so the birds have a chance to see and escape from a predator that accesses the coop at night. Keeping your coop and nest boxes clean, removing all eggs before closing the coop at night, removing rodents which attract predators, getting alarms, cameras, motion detection lights, moving decoys, scarecrows, ultrasonic predator protection, and guardian animals can all help to protect your birds.
Knowing what predators are prone to your area can help you protect your chickens. See our list of most likely chicken predators below.

Live traps are a very humane way of getting rid of predators. Be sure to only put the traps out at night after your chickens are put up, or outside their run and coop so you do not catch one of your chickens by accident. It is also advisable that you have a backup plan of how you plan to dispose of the animals you catch. Taking an animal to an unfamiliar are and dropping it off could mean a horrible death for the captured predator or you could be dropping it off where it could harm someone else's critters. Contact your local animal control to find out how to properly dispose of the captured predators.

Guinea's are often used to keep snakes away. However, I have found this to be untrue. While guinea fowl may not actually protect your chickens from a snake, they will alert you if a snake or any predator is near (including people).