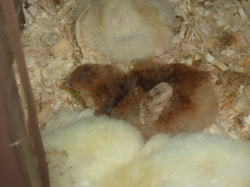 Why it is important that you do not use pine shaving during the first seven to ten days after hatching baby chicks. There skin is very tender and they may eat the pine shavings which can cut through their delicate tissues in their crop, gullet and intestines. I actually had a baby chick who swallowed a piece of pine bedding. The small shaving cut a hole in the chicks crop and was sticking out the side. I had to remove the shaving as it was getting infected. Then applied triple antibiotic to the opening and the chick did survive. Had I not noticed the  baby chick was peeping loudly, (much more than normal) and decided to check the baby chicks body for injuries or illness I would not have noticed the tiny sharp,piece of bedding sticking out of the baby chicks crop, the chick would have died from infection. At first, I thought it was a piece of feed stuck to the  chicks crop but on closer inspection I realized the chick had swallowed a piece of pine bedding and it was poking out through the skin. Thankfully, there was enough poking out I was able to gently remove it. Had it gotten further into the chicks digestive system this could have been fatal.
Alternate safer bedding for chicks from hatch to 10 days old can be used. You can use shredded paper towels, material or other soft material like fleece. Any material that will not harden or ignite under the heat lamp and that is soft without chemicals will do. ​Brooder heating plates are preferable to heat lamps due to the fact that heat lamps if not secured in a metal cage could fall into the brooder causing death and fire.
Memory Verse: ​Or how wilt thou say to thy brother, Let me pull out the mote out of thine eye; and behold, a beam is in thine own eye? Matt. 7:4