Introducing A New Rooster to Your Hens & Other Roosters

How to introduce one or more roosters to your flock.  If you only have hens and wish to introduce a rooster to your flock, you should have few  problems if done correctly but if you are introducing a rooster to your flock that already has a rooster, you could have a real problem. It can be done, in some cases, depending on how many hens you have and the personality of your roosters. A basic rule of thumb is to make sure you have enough hens for each rooster, 6 to 12 hens per rooster is recommended. 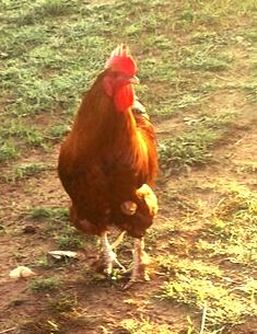 How to Introduce a New Rooster into your flock. CHOE
Introducing a new rooster to a flock with no other rooster
To introduce a new rooster to a flock where no other rooster is present you can simply isolate the new Rooster for 30 days just as you would any other bird and after the 30 day isolation. Place the Rooster in an open cage or pen where the girls can meet him for a few days. After two days you can release him into the flock, by the food and water dishes, while providing snacks, and he will quickly take ownership of the hens, flirting with them, finding them little tasty tidbits and rounding them up at sunset. He will be protective of them. He may end up in an initial conflict with your lead hen who may not wish to give up control of the flock. Watch carefully and break up any fights that may occur right away. Put the aggressive lead hen in a pet carrier or pen among the flock with food and water while allowing the rooster to meet the rest of the flock. Once he has the attention of the other hens and there is no conflict among them you may be able to release your lead hen. If she becomes aggressive again, pen her and wait until nightfall. Once the rooster all the other hens go to roost for the night you can bring your lead hen into the hen house and put her where she normally roosts. In the morning, she should make the adjustment without too much fuss. Scroll down to see how to introduce a new rooster to a flock that already has a rooster and some helpful tips you need to know before you introduce a rooster. 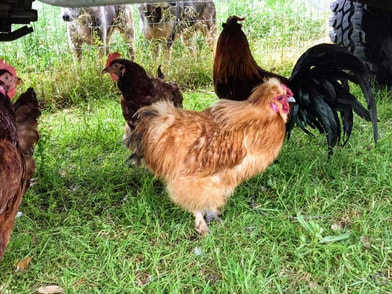 Introducing a new rooster to a flock that already has a rooster
​During the quarantine period (30-90 days) keep the new rooster separated from the flock 30 days full isolation. Get some new fresh hens or raise some for your new rooster that your old rooster has never seen before.
Owning a free range sanctuary for chickens, I have used this method over a hundred times and it works, sometimes with no conflict at all between the boys but there is always that one rooster who will not back off, back down, and wants to control the entire roost without any other rooster present and will not stop fighting. Most likely, this type of dominant aggressive rooster has very high testosterone levels and cannot control his behavior. In this case, you will need a separate coop and run for the troublesome rooster and a few hens. If you want to breed chickens aggressive roosters make the best breeders as they will fertilize more eggs than a non aggressive rooster. Again,  I repeat, do not let the roosters fight. Once you allow fighting even for a minute the roosters natural instincts to kill competitors will kick in and once that happens the roosters will continue to fight every time they see each other. My method has worked more than a hundred times.

Before you get a rooster and before you introduce a new rooster to your flock there are some important things you need to know.
All About Roosters