Sounds chickens make when communicating with each other and with people. Chickens talking, purring, clucking, threatening, calling their baby chicks, and more. 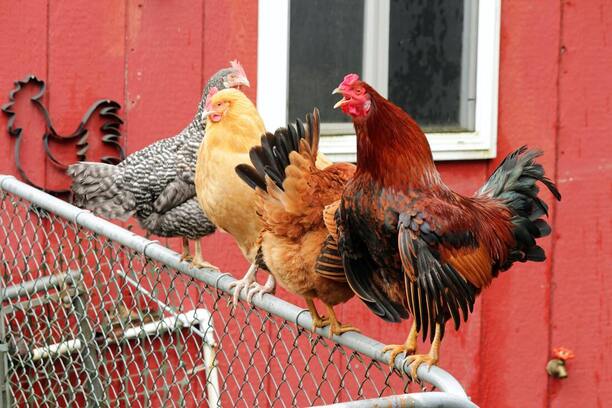 Photo courtesy of Robert-Bottman on Unsplash
Chickens communicate with each other and with their owners. There are standard universal communications between chickens, such as warning sounds and the specific sound that a rooster uses to call his hens for a special treat or tidbit, is the same sound a mother hen uses to call her baby chicks to eat. Warning sounds are also the same. A rooster will use a specific clucking sound to warn of hawks, predators or danger and this is the same sound mother hens use to warn their baby chicks of danger. Roosters will use a different rapid clucking sound to lure hens to a special treat and this is the same sound hens use to lure their baby chicks to a special treat. The alarm call is the same for all chickens and all of them understand what this alarm call means, as one study shows.
"Chickens, too, demonstrate considerable complexity in their use of referential communication. When shown computer-generated animations of natural predators, roosters emit distinctive alarm calls. For example, when shown aerial predators (e.g., a raptor flying overhead), they give one alarm call, and when shown a terrestrial predator (e.g., raccoon), they give another distinct alarm call (Evans et al. 1993a, b). The strongest alarm calls are made when a large, fast-moving hawk appears overhead (Evans e.t al. 1993a, b). The differential responses show specificity in their alarm calls. Likewise, receivers of these calls react to them in specific and appropriate ways, showing that the calls have the same meaning for all of the individuals in the group (1)
​"To add to complexity of this behavior, males often employ risk compensation tactics which shape their communicative behavior when a predator appears (Kokolakis et al. 2010). For instance, a male is more likely to make an aerial alarm call when a female is present, which increases the chances of his mate and offspring surviving (Wilson and Evans 2008)." (1).
Sometimes, chickens do try to imitate sounds their humans make. In my own experience with pet chickens I have found that many of my chickens will try to repeat what I say. When I give a treat I ask the birds if they want a "good good" and my chickens respond by trying to say the words "good good" sometimes when I am not offering a treat one of them will come up and actually say "good good"? with a questioning intonation, in the same way I asked the chickens. I had a rooster who could clearly say, "Noooo" when asked I asked him if he wanted me to take him away from his girls. People who raise pet chickens are more in tune with their chickens vocal sounds and will usually be able to understand what their chicken wants or needs by the sound they make.
Chickens have their own language and scientists are exploring how chickens communicate with one another so farmers and people who raise chickens will know when their birds are in distress or need something.
Things Chickens Do
References:
​1. ​​Marino L. (2017). Thinking chickens: a review of cognition, emotion, and behavior in the domestic chicken. Animal cognition, 20(2), 127–147. https://doi.org/10.1007/s10071-016-1064-4