Rooster's make better guard dogs than guard dogs do. They will send a burglar running for cover. Burglars do not like to make noise and wake people. They want to arrive, steal and leave undetected. Roosters are protective over their hens and their territory. If someone comes to your house most roosters will crow and may even attack the visitor. This may be a good thing if a prowler approaches your home during daytime hours but it could also prove to be a bad thing if your rooster attacks a family member, friend or delivery person. It is a good idea to keep your rooster with his hens in a moveable coop with a run close enough to your house where you will still be able to hear him crow when someone approaches. It is a good idea to have a Beware of Rooster sign on your property to help protect unsuspecting visitors and against possible lawsuits if your rooster does attack someone. 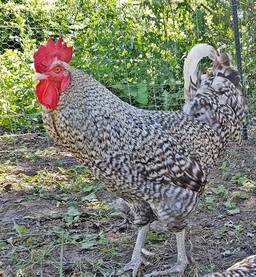 Cuckoo Maran photo by Karen Stencil
One reader, Maggie said, "They may be able to throw a hot dog or "doggie" snack to keep your dog busy but that will not work with a rooster. The rooster will cry out until the robber leaves, is caught or you come on the scene and soothingly, tell the rooster that everything is okay."
If your rooster does not trust the person they will keep crowing despite your protests. The rooster does not have to see the person to know who and where they are. Rooster's have excellent hearing and intuitive instincts when it comes to people.
Several of my neighbors have learned to appreciate their warning crows
When a rooster calls out in the night,  it means that there is someone there that does not belong there.
My roosters have actually woke the neighborhood on several occasion! The next day we read in the paper,  there was a string of car robberies in the neighborhood! On other occasions home invaders/robbers were the cause of their cries.
One local urban chicken farmer, aptly named, "Chicken Man" stated,  "My neighbors have learned the value of my roosters they are more accurate than a car or home alarm system and you do not have to pay 500-1000 to an alarm company for false alarms because there are not any false alarms. "
Motherehens notes: "If my roosters crow at different times or at night it means, someone's out there! Roosters will spur an intruder or anyone or animal that threatens them or their family."Rooster's will crow when they need something, like food, water, clean bedding or a place for their hen to lay an egg. You can reduce noise levels by making sure their basic needs are met, identifying the patterns of their crows and isolating them during peak crowing times. Your pet rooster knows who does and does not normally belong on your property and may react aggressively to strangers who come onto it.If you know you have company coming, put your pet rooster in his cage or pet carrier until they leave so there is less chance of a confrontation and you don't want anyone getting friendly with your guard rooster because then they will be able to get past him without him letting you know. If you have a pet rooster it is a good idea to post warning signs up just in case someone comes on your property because your rooster may become aggressive towards them. ​

Rooster protects property in Mineral Wells, Texas
September 2012-There were a string of truck robberies targeted at Ford pickup trucks on the S. W. side of Mineral Wells Texas. The neighborhood dogs were consoled by the robbers using meat to quiet them while they robbed the trucks.  Several neighbors have roosters in this area and the roosters, quacking ducks, and a braying donkey started making a lot of noise in the middle of the night which alerted the home owner Penelope Dean that something was wrong. One rooster owner reported that she called the police because her roosters woke her and she saw the prowler's breaking into her truck from her bedroom window and she heard the burgle's whistle to each other and watched them run away because they knew the roosters had woke the owner. Yes, roosters make good burglar alarms..and they are cheaper too!
More About Roosters