How to Protect Your Chickens
​From Predators

Here are the ways I have successfully kept predators away from my free range chickens.  Free ranging chickens is a dangerous proposition for chickens where I live out on the Brazos River and a weak security system puts all of them at risk. I have found ways to protect my free ranging birds as well as my coop and run chickens. There are many benefits to free ranging chickens because they have more access to fresh ground, greens, and insects but they are also at the mercy of predators without some type of predator protection.  Even if you have a good hen house and sturdy covered run your chickens could be in danger from predators. Some predators are stubborn and smart like a raccoon who can figure out how to open your electric chicken coop door or locks (I use a hasp lock and padlock), or a fox who finds a weak board, a loose shingle, or digs under, the coop to get in, or a skunk who can squeeze through some fencing (like the one pictured with Peterson and James), or dig into the coop. Hawks are known to swoop down and snatch chickens even with their owner standing nearby. You can protect your chickens from predators with my tips below which I have learned from over 15 years of experience raising chickens in this predator prone area where I live.

Ways to Protect Your Chickens From Predators 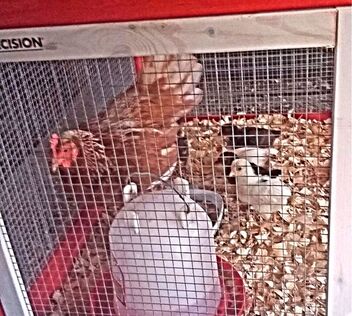