Reasons to Have A Rooster

It is a good idea to have a rooster if you have hens. Roosters are a natural part of raising chickens.  Roosters will sacrifice themselves to save their hens, they make a great country alarm clock to let you know when it's time to get up and start the day. 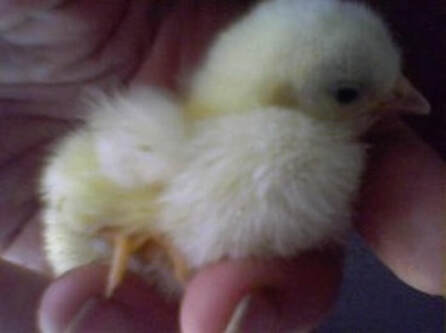 Mr. Snowie. Rescued Rooster Baby Chick at CHOE
During the process of providing commercial eggs for grocery stores male baby chicks are often thrown away and some are sold to be sent to various stores to be bought as pets. The discarded male chicks found during commercial operations  is tragic.The laying hen’s fate is far less merciless than her male counterpart. The male baby chicks are thrown into a trash bin on top of each other. Most of them are still alive days later. The employee’s proceed to gas the remaining live chicks. The males are worthless to the commercial egg producer because they cannot lay eggs. Rooster's have the right to live just as much as anybody else. Getting a rooster for a pet can save baby male chicks from being mercilessly murdered and they make very good company as they will chatter to you while trying to learn how to communicate with you. They are happy to learn new tricks and enjoy human companionship. If they do not have hens around they are happy to be petted and talked to and are much less aggressive during puberty.
More About Roosters