The Homeless Rooster-When the Cock Crows 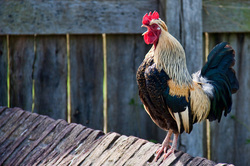 Mr. Sweet Pea
Roosters are no more of a neighborhood disturbance than lawn mowers, barking dogs, cars and trucks. People make noise and roosters are going to crow, that is a fact of life. Crowing is a  natural instinct but this natural instinct is leaving a lot of roosters who could be adopted as pet chickens or have been adopted as pet chickens..without a home. With the rise in urban chicken keeping there has become a noticeable phenomena emerging, The homeless rooster. Many cities do not allow roosters at all with no exceptions. Some cities are considering Shelter's for abandoned roosters. Roosters need homes just like hens do but because of many cities ordinances even towns which allow chickens we have found that most of them do not allow roosters citing the fact that roosters crow and can disturb the neighbors early in the morning while not taking into consideration that lawn mowers, weed eaters, motorcycles, and cars make more noise than a rooster does unless you have one that crows alot. Some residents are looking for shelters to take their rooster too, like Chicken Heaven On Earth and their local animal shelters while other people are just setting their roosters loose which is like issuing a death sentence to their bird. Some of these birds survive and even thrive if they are lucky enough to find a safe place to sleep at night, find food and water but most are left to starve and become food for stray dogs and cats because a bird kept as a pet will not usually do well when dropped off in the wild.
There are many Tips to keep your rooster quiet. Roosters need a lot of attention just like your pet dog or cat would. If your rooster is crowing there is most often a reason for it. You may not see the reason right away if at all but your rooster has excellent hearing and vision and can sense when a predator or threat is near and he will crow to let you know about it and to warn his hens to take cover. Many times the threat is a hawk or other predator nearby who hides when you approach. When your rooster crows you can go to him and croon softly to him to settle him down. Speak in a lower a voice and your rooster will try to soften his tone as well. If your rooster crows to early in the morning you can keep him in a  cage at night in a darkened area. Keep a dim night light in your coop at night so your chickens can see if a predator approaches. Chickens will not move away from a predator in the dark. When you are ready to hear him crow let him outside.  If they get good care and attention they will generally not become aggressive unless they feel their hens or home are threatened. Roosters will protect their hens and they will protect you and they are very serious about doing their job. It is a natural instinct. As far as the noise level. I have gotten used to it but my neighbors did not. In the mornings I keep them in a well insulated hen house in separate cages by a window so they can see the sun come up. This muffles the sound so as not to disturb my neighbors early morning rest.

Easter Chickens are Abandoned and Need to be Rescued

About a month or so after Easter abandoned chickens are found wandering the cities all over the United States. Some are not lucky enough to be found and are torn to shreds and eaten by a predator or tortured by neighborhood children who think it is funny to pick on stray animals that are scared.
The reason this happens is because people purchase cute little colored live chicks for their children to celebrate the holiday only  to realize later that they do not know how to take care of a chicken or that the chicken is a rooster and crows early every morning.
Many pet shelters do not accept chickens if they are brought there by the owners but will take them sometimes if they catch one wandering around in the neighborhood.
If people are going to purchase a baby chick for a pet they need to consider the needs of the chicken as it reaches adulthood just like they would for any other pet.  Keep in mind that most baby chicks sold around Easter time are baby roosters and you can not tell by looking at them although roosters are easier to train and make better pets they can get noisy. Parents and Grandparents seeking to purchase the sweet little chicks should look up information on the computer about what it takes to be a responsible chicken owner, search our website for the latest updates on chicken care or purchase a book to keep on hand for easy reference.