Huge Rooster Attacked By The Wind 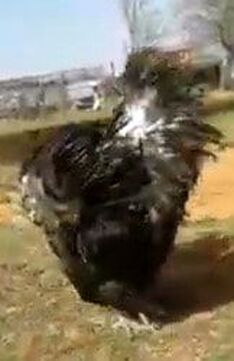 Mr. Luke Rooster Attacked by the Wind. 2019
.Mean Mr. Luke an aggressive, 36 lb Black Australorp, rescued rooster at Chicken Heaven On Earth Sanctuary, met his match on this windy day. Mr. Luke is famous for trying to attack anyone who comes within range of his hens or my front door! He has had a bad attitude ever since a new rooster named Mr. Peterson stole Mr. Luke's hens. I decided to go outside and give Mr. Luke a treat and Mr. Luke was heading toward me and most likely would try to attack me, when the wind suddenly picked up with some very gusty wind. The wind was so strong it nearly knocked Mr. Luke over and would not let him move toward me. He is a very big and strong rooster yet he was no match for this wind! Since the making of this video, Mean Mr. Luke's attitude significantly changed. He was adopted by Still Water Farms in 2019 and has so many hens he has not shown the aggressive tendencies at his new home. Mr. Luke also got a new name, they call him, "Your Majesty". Apparently Mr. Luke finally got the respect he was demanding and so many hens he doesn't have time to be Mean Mr. Luke anymore or maybe this wind taught him a lesson.
​See Mr. Luke being attacked by the wind in the video below.
Reference:
Huge 36 Lb Rooster Attacked By the Wind-Mr. Luke [YouTube Video]. (2019). Retrieved from https://www.youtube.com/watch?v=S5lD0gcrilo