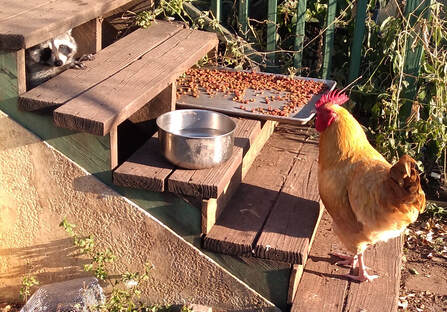 Raccoon and Chicken photo courtesy of Teri Gruning.
If you suspect you have predators stalking your chickens a chicken coop camera is an affordable way to find out exactly what is going on in your chicken coop.
Reasons to get a camera for your chickens:
The main reasons you need a camera on your chicken coop are:
​1. See if a predator is stalking your chickens.
2. Find out why eggs are broken or missing.
​3. See how your chickens interact with each other when you are not around.
​4. Chicken thieves-Yes, some people do steal chickens.
If you suspect you have a chicken predator and want to find out what it is or if you just want to keep an eye on your chickens while they are in the coop or yard and you are in the house, or if you just want to see how your chickens act when you are not around, then you may just need a chicken camera. It is best to get a camera that has a microphone so you can also hear what is happening in your coop, especially at night. I tend to turn the microphone off during the day but I always leave it on at night, when the birds are usually quiet, unless a predator has entered the confines of their coop. My chickens have their own 3 bedroom trailer house converted into a hen house but I also have several other coops as well. Using camera's has allowed me to save their lives on several occasions. One night I heard them screeching at around 11:30 pm on the camera's voice monitor, I looked at the camera but could see nothing in their coop, the panicked sound in their screeches gave me chills and I decided to go have a look. When I entered I heard something moving quickly thru the bedding, so I grabbed a nearby shovel and good that I did. As I walked into the main area I seen the biggest snake (I am not sure what kind  it was because the underside markings had a checked pattern) I have ever seen, large enough to swallow an adult chicken whole! I have dealt with snake problems before as I live by the Brazos River and they are quite common here. My first reaction was to pin the snake with the shovel, bad move on my part, I underestimated the reach of the 10 foot long snake as it lunged toward me. This surprised me to since usually snakes will go away from you unless you have them cornered. Luckily, there was an old metal milk bucket close by, I grabbed it and hit him in the head several times, which stunned him long enough for me to get him out of my hen house. I had small live traps but was not catching anything in them, on my camera I seen that I had raccoons circling the hen house and trying to get in at night, I realized it was only a matter of time before they did and bought a bigger trap. Closely watching my monitor I caught 2 raccoons in one night and it was a good thing I was watching because I was able to get rid of the coons and get the trap set again, giving me the opportunity to catch another. I would have caught a 3rd one but I went to sleep thinking I had caught all I would get for the night. The camera picked up a larger raccoon who actually got in the trap, took the bait and held the cage open with her body! I got an even bigger trap the next day only to watch as she flipped the trap upside down and got away. I staked the trap down and caught her that night. Had I not installed the security camera's I shudder to think of what would have happened to my sweet little chickens.Reasons you may need a camera in your chicken coop, see video footage of chickens on camera and how they reacted to it, plus you get the best deals on indoor and outdoor camera's which can be used in and around your coop.  Here are a few cameras which I have found to work well in my coops.
References: Featured video. cgabby13. (June 7, 2009). Chicken Cam. Youtube.com. https://www.youtube.com/watch?v=MIoKbj9OiPc