Note: I may receive a small commission from eligible purchases made from ads featured on this website which helps me to keep it going. Thanks for your support.
The story of a tiny rescued baby chick named Fox 4 whose telling explains why you should never let your baby chick sleep with you. In the early days as Chicken Heaven On Earth rescue sanctuary was just beginning Fox 4 the baby chick was one of the first baby chicks hatched here and from his short life, I learned unconditional love, a deep sense of responsibility, and an internal drive to learn every thing I possibly could about chickens so I could share it with other people so they would never have to suffer the heartbreaks I did when I first started raising chickens of my own.

The Legend of our Fox 4 Chicken 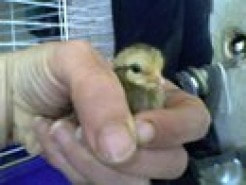