Frog The Rooster-Smart Chicken Of The Week 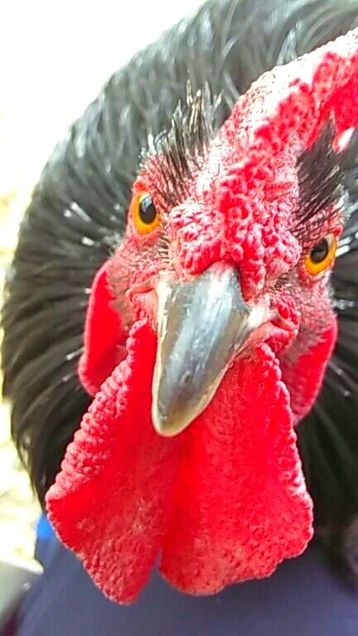 Frog the Rooster may look like an ordinary black Cochin rooster but there is nothing ordinary about Frog! He does some amazing things you would not expect a chicken to do. Frog the Rooster does not have the ordinary life of the average backyard chicken, he is more like part of the family. Frog goes jeep riding, supervises when chores are being done (even welding). He takes his job of taking care of his humans Savannah and Cody very seriously. Frog loves to go shopping at Tractor Supply, talks on command, knocks on windows, loves tater tots and ice cream , and he even has a cat named Lulu for a friend that he likes to play with. One amazing thing Frog does that really caught our eye is he actually runs to meet his human friends at the bus stop, and not because they have something to eat for him.  The school bus comes everyday and Frog knows they are on that bus, he waits for them, and runs to meet them and then he escorts them back to their home where he is welcome to come in. This is a must see. Watch Frog in the video's below and see Frog the Rooster's Award for Smart Chicken of The Week for Week 10 at Chicken Heaven On Earth 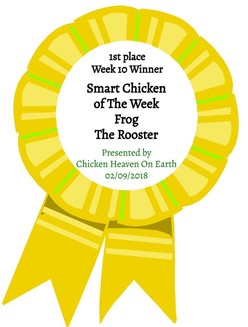 We took a vote and Frog the Rooster is the winner for Week 10-Smart Chicken of The Week.
We LOVE HIM!
Frog the Rooster has gone viral as he has been featured on more than 100 websites on the internet, has his own Facebook page and Youtube page and is loved by thousands of people all over the world.
Frog the Rooster even has his own T Shirt for his fans to buy (see below).
So, If you have not met him yet you simply must do so now.
Scroll down to see why! 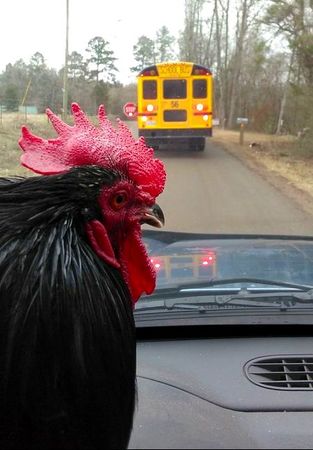 Frog the Rooster takes his job of escorting Savannah & Cody home from the school bus so seriously, he has even been known to drive up behind the bus to make sure they are okay.."He knows Cody is on that bus".
​How Frog the Rooster became famous:
"When school started back in August, Frog would follow me to the front yard to sit and wait on the bus. After two days of doing this, he decided on day three he would wait on the kids. On that day he took off down the driveway and the rest has been history. He will meet them everyday (weather permitting, if its storming out he will be indoors but crows when its time for the bus) . He also walks Savannah down the driveway almost every morning also to get on the bus"--Holley Burns (Frog's owner).
Watch the video below to see what Frog does when the school bus pulls up and how he goes shopping below.

Featured Video: Frog The Rooster-She Made it Home

Here Frog is clearly on duty as he escorts Savannah from the school bus. Part of Frog the Roosters daily routine is meeting his humans when they get off the school bus and escorting them home..but wait...it's Frog's home too which is clearly obvious as he wipes his feet off before walking inside! See more about Frog below the video. 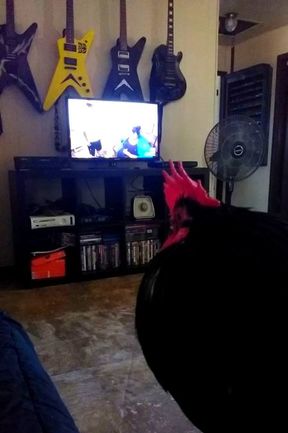 Frog the Rooster watching TV
Clearly, this is Frog the Roosters home.
He works hard taking care of his family and likes to enjoy his free time watching TV.
​Frog also does a bit of shopping..yes, he actually goes to the store, as you can see from the video below.

Yes. That is Frog in the store-shopping! You can see more of Frog the Roosters video's on his Youtube Channel. ​https://www.youtube.com/channel/UCrEin4Sye1QZ8RnPtzbr5rA See more about Frog below the video. 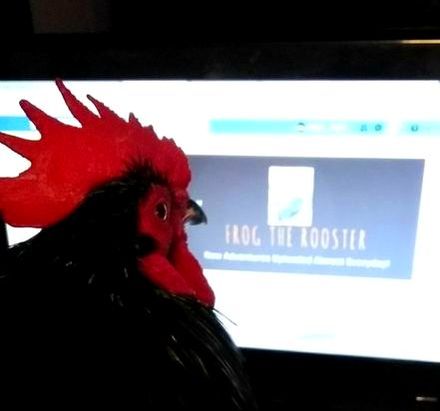 Frog The Rooster checking his Facebook page
Frog the Rooster even has his own Facebook page. He likes to check it every day to see his followers comments and too see how many followers he has. If you would like to follow Frog on his adventures on Facebook go here: ​https://www.facebook.com/FrogTheRooster/
​If you are a fan of Frog the Rooster you can even get his latest T'Shirt plus find out how Frog got his name. (See  below).

How Frog the Rooster got his name 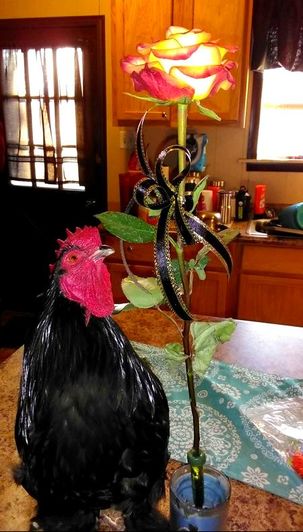 Frog the Rooster is loved by so many people, he even gets roses from his fans! He got this rose from Tori.
Remember, a single rose means "I Love You" and we sure do love Frog. We were curious on how a rooster got a name like Frog and we would have never guessed this!
How Frog the Rooster got his name:
"We raised Frog from a hatchling. He quickly became much different from the other chicks. He was more attentive and had interest in everyday things and everything my daughter did. He "hopped" like a frog more than he walked, hence why we named him Frog . At first we thought Frog was a hen, till he grew older. Then we realized our sweet hen was a rooster! After he learned the routines around the house, he wanted to go everywhere and I mean everywhere. What ever you were doing he wanted to be involved. He saw you get in a vehicle he was getting in with you and going. He started spending a lot of time watching while we built and restored my Mustang. He got extremely excited when he heard it crank up, and was determined to go. With every gear he would cluck and carry on happily. He still loves helping, well supervising the work. Then he learned the Jeep went other places. So he would jump in the Jeep and do the everyday farm life. His favorite thing to do is go to the Auto Parts store, where his human dad works. When school started, he noticed the school bus. He watched the kids get on and off. He watched for about two days. Third day we noticed he was keeping up with the time and waiting in the front of the house. Read more...
​Scroll down to see more exciting stuff about Frog the Rooster. Isn't he awesome?

Get Your Frog The Rooster Fan T'Shirt or Hoodie

Frog the Rooster has so many fans, he has started selling T'Shirts and Hoodies because his fan's want to help him support his channels. Men's & Women's Styles Available. Get your Frog the Rooster T'Shirt or Hoodie Here: ​https://www.customink.com/g/bmn0-00ba-rxsq
Shop Frog The Rooster T Shirts & Hoodies

Ever See A Pampered Chicken? These Chickens are spoiled Rotten!

Find out more about Chicken Intellegence