The Bearded Self Blue Silkie Bantam breed information, appearance, personality, This breed is now an accepted breed by the American Poultry Association as of Dec. 12, 2010. 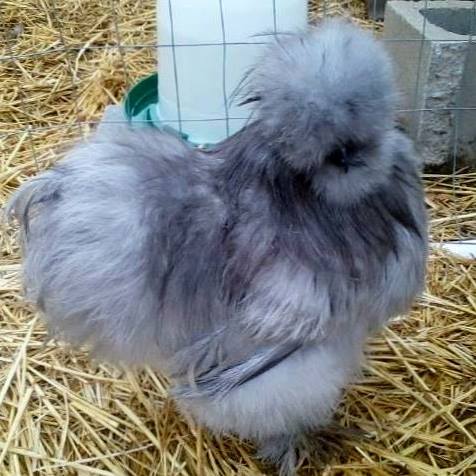 Bearded Self Blue Bantam Cockerel. Claudia Knudten. Top Notch Virtual Poultry Show (1)
The color for the males and females is the same.
Comb, Face, & Wattles: Deep mulberry.
Ear Lobes: Turquoise blue.
Beak color: Slate blue to black.
Eyes: Black.
Shanks and Toes: Slate blue to black. Blue Silkies have five toes on each foot.
​Plumage (Feathers): The entire surface an even shade of light, slate blue, free from mealiness, cloudiness or mottled appearance.
Birds with these colors would be disqualified as Bearded Self Blue Silkie Bantams: ​Red, yellow, orange or positive white in any section of plumage (2).
​Personality: Docile, easily handled. (Just as sweet as they are cute) but this depends alot on  how the bird was handled and treated since hatched.

Blue Silkie Bantam Chicks
"Both China and Japan claim the origin of these unique bantams, and historians have traced them back to Marco Polo. Their black skin and feathers that feel much like hair make them one of our most unusual varieties of chickens. Our Silkies come both bearded and non-bearded and are tremendous setters on all types of eggs. Blue Silkies have all of the qualities of the other Silkies but the Blue Silkies will vary in feather color. Approximately 50% will be black, white, and black/white combinations" (Murray McMurray Hatchery).  See Video Below.
More Silkies
Reference: