Cats are often unsuspected chicken predators with their most likely victims being baby chicks and small chicken breeds such as Bantams, Serama's, Silkies, or Cochins due to the fact that they are small and have jerky movements that trigger the cats natural hunting instincts. Not all cats will go after your chickens and a well behaved cat with predatory instincts can actually be good to have around because cats will kill mice and if there are no mice in your coop, snakes won't have a reason to come around unless you have a broody hen or baby chicks in there. Cats are considered Apex predators which means they are at the top of the food chain and have no predators which are specifically hunting them as food but as some cat owners can attest too, cats have become victims to predators such as hawks, raccoons, and foxes. Cat's won't protect your chickens from other predators but they will eliminate (or at the very least) keep the rodent population down in and around your coop. 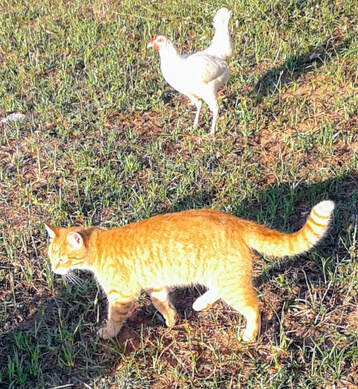 Q: Can I keep a cat in my chicken coop at night?
A: That depends on your cat. If your cat is good around your chickens and your chicken feed is in a feeder not a feed pan, and there are no baby chicks or small chickens in the chicken house then you most likely wouldn't have a problem. My cat "Gidget" who is spayed and was an adult cat when I got her who had never been around chickens, loves to sleep in the chicken coop at night, she keeps the coop rodent free, and does not bother my chickens. I have cameras in the coop so I can see what she is doing at night. It is not uncommon for me to open the coop door and find her "trophy kills" lined up by the coop door in the morning while Gidget proudly awaits my approval. Make sure your cat does not have fleas or worms. If you keep a litter box in the coop for her, make sure it is one that the chickens cannot get into or is in a place where the chickens cannot get at the litter because they will eat her feces if they get the chance which is not good for your chickens.
Note: As an Amazon Affiliate, I receive a small commission from eligible purchases on this site which is how I keep this site up and running.
References:
1. Photo. Cat, Chicken, Chickens, Hen. (2018). Pixabay.com. Retrieved 18 July 2018, from https://pixabay.com/en/cat-chicken-chickens-hen-animals-2112627/
2. Photo. Cat with bay chick on it's head - Illustration, Color, Design. (2018). Pixabay.com. Retrieved 19 July 2018, from https://pixabay.com/en/illustration-color-design-freehand-1518342/