Cochin Bantams also called Pekin in most European countries are debated as to whether or not they are actually miniature cochins. Cochin's are a very large breed of chicken with the same characteristics as the Cochin (Pekin) Bantam even though the Pekin Bantam is considered a true bantam. A true bantam has no standard sized counterpart. Below you will find origin, characteristics, video and photos of Cochin (Pekin) Bantams plus best buys on chicken care supplies.

Cochin Bantams Accepted by the APA 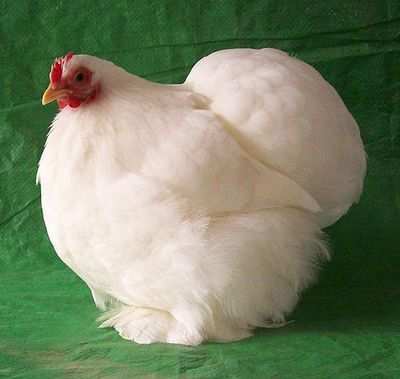 Purpose: Ornamental-Most often kept as pets due to their calm friendly nature and often used in gardens because they do not tear up the soil as harshly as standard sized breeds.
​Personality: Docile and calm, males are said to seldom become aggressive but bantam males will occasionally try to fight one another.
​Go Broody easily
Cold hardy
​Endure confinement easily
Feather slowly
Egg Color: Brown
​Feet and Shanks: Feathered

"Cochins are predisposed to becoming too fat. Such fattening can stop egg production and even lead to death by disorder of the liver. Lewis Wright, in his book The Practical Poultry Keeper, circa 1892, recommended that Cochins should receive a daily ration of green food to keep them healthy" (Livestock Conservancy). See more below

"Soldiers, returning from China, brought the first Cochin bantams to England in the 1860's. They were known as 'Pekin" bantams then and are still referred to as "Pekins" in many parts of Europe today. Cochins are heavily feathered down the shanks and toes and appear to be much larger than they actually are" (Murray McMurray Hatchery).

​"The first Pekins are alleged to have been looted from the private collection of the Emperor of China at Peking (now known as Beijing) by British soldiers towards the end of the Second Opium War around 1860. However, some sources suggest that a consignment of birds from China around 1835 were given to Queen Victoria, assuming the name of 'Shanghais' and that these birds were bred with further imports and were developed into the breed we know today as Pekins. The Pekins first brought to the United Kingdom are said to have been Buff in colour, with Blacks and Cuckoos arriving later on.They are known in the United States and Canada as Cochin Bantams" (Wikipedia).
​

Cochins are huge beautiful feather footed birds with a sweet calm personality. The Cochin and the Brahma chicken were the start of an era known as "hen fever" where there was a national obsession for all things poultry around 1850 in America and England. China originally developed the breed to be a large size bird that produced extremely large eggs, and would be a excellent meat bird. The hens would be table ready in 12 weeks while males were ready at 15 to 16 months weighing in at a whopping 12 lbs. If they were slaughtered at any other time the meat texture was coarse with more dark meat than white.
"The Cochin chicken, though promoted with great enthusiasm as productive all around, never met with commercial success. Stephen Beale in 1895 wrote in his book, Profitable Poultry Keeping, “The Cochin then and now being the least profitable of all of our breeds of poultry [1850-1895].” (Livestock Conservancy).
1. APA Recognized Bantam Breeds and Varieties (2017). ​http://www.amerpoultryassn.com/Bantam%20Breeds%20-%20APA%20Web.pdf
2. Cochin. Retrieved on Oct. 3, 2017 from Livestock Conservancy. https://livestockconservancy.org/index.php/heritage/internal/cochin
3. Cochin Bantams. Retrieved on Oct.3, 2017 from Murray McMurray Hatchery. ​https://www.mcmurrayhatchery.com/cochin_bantams.html
4. Pekin Bantams. Retrieved on Oct. 3, 2017 from Wikipedia. https://en.wikipedia.org/wiki/Pekin_chicken