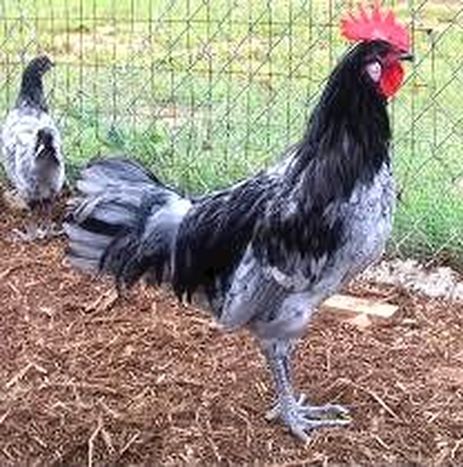 Blue Andalusian Rooster & Hen. Photo used under creative commons from Poultry and Livestock on Facebook. https://www.facebook.com/poultryandlivestock/
Origin: Spain/ Mediterranean
The Andalusian originated in Andalusia, Spain-a rare Mediterranian breed they can be found in standard size and bantam sizes. They have a Single comb and come in a wide range of colors but generally they are white with grey and black feathers or dark and light grey feathers. The Blue Andalusian is the most recognized of this breed by the poultry association.
They are hearty breed that does not do well in cold temperatures but the hens lay well even in colder temps. Andalusian's tend to be slightly smaller than standard breeds but are very active and entertaining. They do not like to be handled or confined to small areas. Hens do not go broody easily but are excellent egg-layers. Make excellent show birds.
Rooster Size: 6-8 lbs.
Standard Hen Size: Medium 6-7 lbs
Bantam Size: 2-5 lbs.
Egg Color: White
Egg Size: Large
​Scroll down to view our featured video of Blue Andalusian Chickens

These chickens represent the beautiful color and show quality of the Blue Andelusian.

"Andalusian chickens were first imported into England by Mr. Leonard Barber in 1846-47. These birds came from Andalusia, about 25 miles from Cadiz, from a Mr. Xeres de la Frontera. In 1851, Mr. Coles of Farnham and Mr. John Taylor of Shepherd’s Bush also imported more. Andalusian chickens were widely distributed around Cornwall and Devon. The breed was first exhibited at the Baker Street Show, in London, in January of 1853. Somewhere between 1850 and 1855 Andalusian chickens arrived in America" (Livestock Conservancy, 1).


Andalusian chickens are wonderfully designed for foraging on range. The breed’s rugged nature makes it hardy even in cold climates. It does not stand confinement well, however, and is predisposed to feather eating. An excellent traditional cross is an Andalusian male over Langshans females. This produces a hardy brown egg layer that matures early.
The Blue Andalusian chicken was recognized by the American Poultry Association as a standard breed in 1874. Males weigh 7 lbs and females weigh 5.5 lbs (Livestock Conservancy, 1).