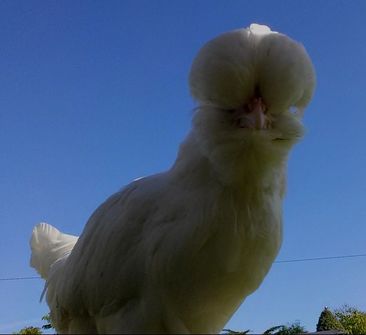 Sultan Chicken. Permission for use granted from Sultan Chickens on Facebook. https://www.facebook.com/Sultan-Chickens-323603467654844/
Appearance: This unique beautiful somewhat erect standing chicken has a regal V-shaped comb, a crest, a beard, muffs, large nostrils, low drooping wings which cover the thigh and upper hock, vulture hocks, feathered shanks, and toes with five toes on each foot.
​Color: Pure white feathers (the only APA recognized variety). However Blue Sultans and Black Sultans can also be found.
Shanks and Toes: Slate blue
Male Weight: 6 lbs
​Female Weight: 4 lbs.
​Bantam: 22 oz.
Egg Color & Size: Small white eggs (Lay best from March-September).
Broodiness: Non sitters
Confinement: Do well in confinement
Personality: Docile and friendly
Once considered as good table fowl because they have large breasts and the meat is delicate and white (The Livestock Conservancy, 1).
Most breeders are careful to raise them in dry bedding to protect their feathered feet and shanks and they keep them separate from more active breeds (Wikipedia, 3). Scroll down to see their origin, history, photos, and our featured video! 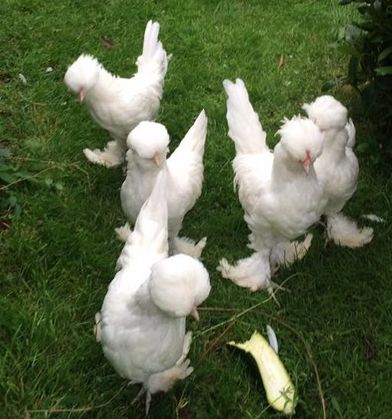 Sultan Family. Permission for use granted by Sultan Chickens on Facebook. https://www.facebook.com/pg/Sultan-Chickens-323603467654844/photos/?tab=album&album_id=879163332098852
Sultan (Serai Taook) chickens a native of Turkey, are considered as a rare breed ever since 1984 when the breed first delivered to Mrs. Elizabeth Watts of Hampstead, England, (Editor of Poultry Chronicle published in London) from a friend of hers who lived in Constantinople. Mrs. Watts wrote about the birds saying when they arrived they were in dreadful condition, were dirty with mud stained feathers which were matted together. She said she couldn't tell the birds were even white until months later after they had went through a molting stage before she could tell that they were pure white.
"The first Sultan chickens came to America in 1867. A woman in New York sent them to author and poultry expert Geroge O. Brown. Mr. Brown wrote of the Sultan chickens that they were the tamest and most contented birds he ever owned. He noted that they were more fond of grains and insects than vegetables, and that they “almost constantly” sang that contented chicken song", (The Livestock Conservancy, 1).
Scroll down to find out how the Sultan chicken got it's name, APA information, see photos, and videos of Sultan's.

Serai is a Turkish word meaning Sultan's palace and Taook is the Turkish word for fowls. So Serai Taook means Sultan's palace fowls. As the legend goes these lovely birds were kept as living ornaments in the gardens of Sultans (Probably not only for their appearance but also because they are known to do less damage to grassy areas than Cochin's or Brahma's). They were referred to by many as "Sultan's Fowl", "Fowl of the Sultan" and later simply as "Sultan" and so this chicken breed which has a royal appearance was aptly named Sultan (The Livestock Conservancy, 1).

Early breeders crossed the Sultan's with Polish chickens to add new blood to the existing line. The breed stabilized and was included in the Standard of Excellence published by the American Poultry Association in 1874 which only recognized one variety and that is pure white. (The Livestock Conservancy, 1).

I found some of the most beautiful Sultans while searching the web at Sultan Chickens Facebook page and I simply had to share them with you. Be sure to like their page! ​https://www.facebook.com/Sultan-Chickens-323603467654844/