As many of you know we are constantly on the lookout for smart chickens and viola! We have found another little genius. This little hen aptly nicknamed, Einstinia participating at Terry Ryan Chicken Camp has proven that she is a very smart chicken. When shown cards with various animal shapes Einstinia the chicken finds the zebra almost every time. Watch her go!

"Nicknamed "Einstinia," this is the chicken I trained while participating in chicken camp, a program designed to improve training skills. Her job was to peck only the zebra. She was the only hen in class to correctly discriminate between all of the zoo animals. She misses a few times here, but reached a consistent 100% in subsequent trials. And discrimination was only one of many "tricks" we taught them. As a licensed vet tech working for a Veterinary Behaviorist, part of my job involves demonstrating to our clients how to teach foundation behaviors and how to implement the behavior modification exercises that Dr. Sung prescribes. Chicken Camp was an amazing experience! I recommend it to ANYONE who works with any type of animal --- including homo sapiens. A few of my classmates were elementary school teachers" (Paula Scott, 2016). 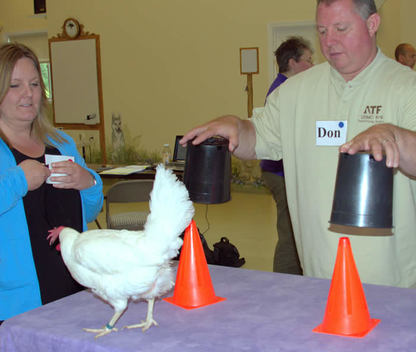