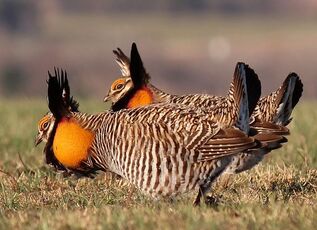 Lesser Prairie Chickens
The Bill Lesser Prairie Chicken Voluntary Recovery Act of 2015 removed the listing of the lesser prairie chicken as a threatened species under the Endangered Species Act of 1973 and prohibits further treatment of the species as threatened or endangered before Jan. 32, 2020. However the Interior will still monitor and submit annual reports on the progress in the conservation of the lesser prairie chicken under the Lesser prairie chicken range Wide Conservation Plan of the Western Association of Fish and Wildlife Agencies which are in voluntary agreements to measure the species. Candidate Conservation Agreements With Assurances agrees to voluntarily measure the covered species to see that additional measures will not be imposed if the species becomes listed in the future. Conservation programs currently administered by the U.S. Fish and Wildlife Service, The Bureau of Land Management and state conservation programs, and private conservation efforts will all be monitoring.
"The lesser prairie chicken may not be treated as threatened or endangered beginning on January 31, 2020, unless Interior publishes a determination that conservation efforts under the Range-Wide Plan, agreements, programs, and efforts have not achieved the Plan's conservation goals". (1)‌ Even though the Lesser Prairie Chickens appear to be recovering from the threats that caused their disappearance on the prairies due to exhaustive conservation efforts, these beautiful birds still need help to fully recover.
​See The Lesser Prairie Chicken Range Wide Conservation Plan here: ​https://www.wafwa.org/Documents%20and%20Settings/37/Site%20Documents/Initiatives/Conservation%20Plan%20for%20LPC/TheLesserPrairieChickenRange-WideConservationPlan.pdf
The Greater Prairie Chicken-Updates
"Greater Prairie-chicken (Tympanuchus cupido) originally was thought to occur in natural prairies from central Alberta (Canada), south through central U.S.A. and into Texas. Now, however, it is no longer found in Canada, and only remains in scattered patches, predominantly in mid-western U.S.A. (see de Juana and Kirwan 2018). Loss of its habitat is thought to have played a key role in declines in this species, including the extinction of subspecies T. c. cupido, and continued habitat fragmentation may lead to reduced genetic variance within subpopulations (Westemeier et al. 1998). The species still also suffers from hunting pressure, and the introduced Ring-necked Pheasant (Phasianus colchicus) may be acting as a competitor to this species (see Johnson et al. 2011, de Juana and Kirwan 2018). As a result, the species was considered to be undergoing a rapid decline, and the species is currently listed as Vulnerable under criteria A2bcde+3bcde+4bcde (see BirdLife International 2018)" (2).
​Related Links:
More About Lesser Prairie Chickens