Here you will find out what causes Coccidiosis in chickens, signs that your chickens may have it like blood in their feces, how to prevent it, how to treat it, and how to stop it from happening again.

Information About Coccidiosis In Chickens 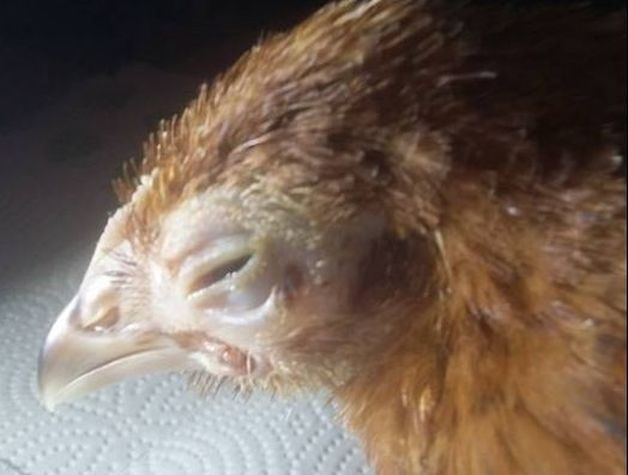 Frizzle pullet with Coccidiosis (C). CHOE. 2017
Coccidiosis is a microscopic organism which infects the intestines of chickens, game birds, turkeys, ducks, quail, pigeons, and other poultry, including wild birds. It is a a dangerous and rapid organism which can take over your birds intestines and the mucous membrane that faces the intestines as quickly as 4-7 days causing a high mortality (death) rate. It is usually contracted by the birds eating sporulated oocysts which are usually contracted by mosquitoes, farm workers, clothing, infected feed, dust, feces, wet litter around water vessels or contaminated litter. It can also be transmitted by younger birds to older birds and by birds who have previously contracted it and recovered. This parasite cannot withstand freezing temperatures, extreme heat, or extremely dry conditions . It is preventable and treatable if caught in time (See signs, symptoms, and treatments below).

I use Amprolium (Corid) 20% soluble powder for the prevention and treatment of Coccidiosis in my chickens. The recommended mixture of amprolium to water  is 8 ounces per 50 gallons of water. "Give amprolium at the 0.012% level (8 fl oz per 50 gallons) as soon as coccidiosis is diagnosed and continue for 3 to 5 days. (In severe outbreaks, give amprolium at the 0.024% level.) Cointinue with 0.006% amprolium medicated water for an addition 1 to 2 weeksl;. No other source of drinking water should be available to the birds during this time.l Use as sole source of amprolium" (Amprolium P. FDA Drugs.com https://www.drugs.com/pro/amprolium-p.html)

Causes of Coccidiosis In Chickens 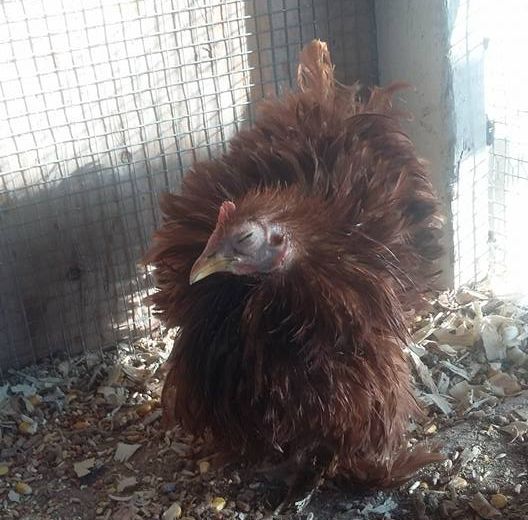 Frizzle Chicken with Coccidiosis. (c)2017. Chicken Heaven On Earth
Dirty litter-oocysts can survive in dirty litter for many months. When treating birds make sure you change all litter, wash coop, nest boxes, and anything the birds have contact with.
Over crowded living conditions-Relieve over crowding by allowing birds to free range, expand your coops or build new ones.
Contaminated food or water-Discard any food or water that the sick birds have had access to. Wet areas around water containers are a major source for contracting Coccidiosis in poultry.
Contaminated food or water containers, tools, nest boxes, etc. After scrubbing everything I use canned air on my smaller coops to freeze everything as the Coccidiosis parasite can't withstand freezing temperatures. It also makes it much easier to clean inside cracks between boards, seams on nest boxes, etc.). For large chicken houses which have Air conditioning I drop the Air temp down to 32 degrees for several hours-Motherhen).
Poor Feed-Chickens who are fed poorly are more likely to get Coccidiosis than birds fed feed that is high in vitamins and proteins. It is important to meet your bird's nutritional needs with complete and balanced poultry feed.

Inspect your chickens daily. Always look for signs of Coccidiosis because early detection and treatment can prevent the death of your chickens. Coccidiosis is highly contagious to other birds in your flock so any birds showing signs of illness should be isolated from the rest of the flock. If you put the infected bird in a large pet carrier or cage, make sure you use a chicken diaper to catch their droppings, this will make the possible recovery of your chicken much better because dirty litter grow's oocysts. These are microscopic eggs which pass through the chickens droppings. Once treated and recovered any bird that has had Coccidiosis should be in a separate coop from your healthy birds. Contamination can be transferred from young birds to adult birds so it is a good idea to keep your young birds separate from your older birds. Older birds who have recovered from Coccidiosis may still be carriers and should also be kept separate.

Signs of Cecal Coccidiosis in Chickens

See use levels (% in feed) and withdrawal times (Merck Vetrinary Manuel, 2).
Coccidiosis Drug Resistance:
Some strains of coccidia are drug resistant so if one type doesn't work you may need to try a different kind.
"The emergence of drug-resistant strains of coccidia may present a major problem. Methods used to avoid the development of drug resistance include switching classes of drugs and the "shuttle program," which is a planned switch of drug in the middle of the bird's growing period" (1).

Wire floor cages
Studies show that birds who are well maintained and kept on wire floor cages have less contact with feces and are much less likely to contract coccidiosis. Try to roost birds over wire netting if possible. "I use plastic storage tubs under my roosts with 1" or 2" inch chicken wire covering the top. I hold the wire on the tubs with duck tape. This allows the feces to fall into the tubs but does not allow the chickens to get into it"-Rev. Penny Dean

Administering Drugs
​Anticoccidial drugs mixed in the feed are used to limit high levels of infection.

Positioning
Keep chicks, feed and water away from droppings and use wire frames underneath water containers to reduce the amount of wet droppings which chicks can pick up and spread the disease with (Merck Vetrinary Manual, 11th edition).
Proper care of Litter
Litter should be kept dry. Remove any wet bedding and replace with clean, dry litter.
Avoid Overcrowding Your Coop
​"I try to make sure that there is at least 120 square feet per chicken in my coops. This reduces the amount of sickness, disease, and there is much less pecking at each other. I also allow all of my birds to free range outdoors during the day. I have 2 acres which 150 chickens are allowed to roam and have had very few incidences of sickness or disease in my flock".--Rev. Penny Dean
If you see signs of Coccidiosis start treatments right away.

When purchasing baby chicks you should make sure the hatchery you purchase them from vaccinates your baby chicks. There is usually a small fee for the vaccinations but it is well worth it to protect your chickens. This will save you and your chickens lots of health problems later on. If you have your chicks vaccinated you should not use medicated chick feed or any medicated feed containing Coccidiostat.

Stages of coccidia in chickens appear both within the host as well as outside. The developmental stages in the chicken give rise to a microscopic egg (called an oocyst) that is passed out in the droppings.
Under proper conditions of temperature and moisture, the oocyst develops within one to two days to form a sporulated oocyst, which is capable of infecting other chickens. At this stage, the oocyst contains eight bodies (called sporozoites), each of which is capable of entering a cell in the chicken's intestine after the oocyst is eaten.
When sporozoites enter the cells, they divide many times producing either a few or many offspring (merozoites). The numbers produced depend on the species of coccidia involved. Each merozoite, in turn, may enter another intestinal cell. This cycle may be repeated several times. Because of this cyclic multiplication, large numbers of intestinal cells are destroyed.
Eventually, the cycle stops and sex cells (male and female) are produced. The male fertilizes the female to produce an oocyst, which ruptures from the intestinal cell and passes in the droppings. Thousands of oocysts may be passed in the droppings of an infected chicken; therefore, poultry raised in crowded or unsanitary conditions are at great risk of becoming infected... ​​"Coccidiosis in chickens is generally classified as either intestinal or cecal. Most serious cases of intestinal coccidiosis are caused by E. necatrix. Cecal coccidiosis is due to E. tenella.Coccidiosis occurs most frequently in young birds. Old birds are generally immune as a result of prior infection. Severe damage to the ceca and small intestine accompany the development of the coccidia. Broilers and layers are more commonly infected, but broiler breeders and turkey and pheasant poults are also affected.
Coccidiosis generally occurs more frequently during warmer (May to September) than colder months (October to April) of the year. E. acervulina and E. maxima develop in epithelial cells within the small intestine and generally cause chronic intestinal coccidiosis". (Alberta Agriculture and Forestry, 2001).

Oocysts can survive in litter for several months after all symptoms in the birds are gone. This is why poultry farms and chicken coops can be recontaminated year after year. Oocysts can be killed by freezing, extreme dryness, and high temperatures (Alberta Agriculture and Forestry, 2001). ​
Coccivac Vaccine

Additional Information About the LIfe Cycle of Coccidiosis

Eimeria tenelia-Is a parasite that develops in the cells of the ceca (2 blind sacs close to the end of the intestine). Is pathogenic which means it is disease producing and the most likely to infect young chicks. Blood in the dropping and high deaths is a sure sign of it.

E. acervulina and E. maxima
Both species develop in epithelial cells, primarily in the upper part of the small intestine. They cause subclinical coccidiosis associated with marked weight loss (Alberta Agriculture and Forestry, 2001).