Facts about caponizing roosters. Video's of caponization, age a rooster can be caponized, weight gain, feeding, behavior changes after castration and more.
What does Caponization mean?
Caponizing a rooster is a when you have the roosters testicles removed, some people refer to this as gelding, castration, or neutering. Once the testicles of a rooster are removed he will no longer produce testosterone. If there is a "Slip" in the procedure and all of the testicle is not removed the bird will still produce testosterone.
Reasons why people castrate roosters:
​People caponize roosters for many different reasons. Some caponize their roosters so they will gain weight and become Capon roosters bred for eating. Others have their roosters caponized to stop them from crowing, stop them from mating with their hens, or to make them less aggressive. Studies have shown that testosterone levels increase aggression so it makes sense that castrating a rooster will make him less aggressive if it is done correctly. 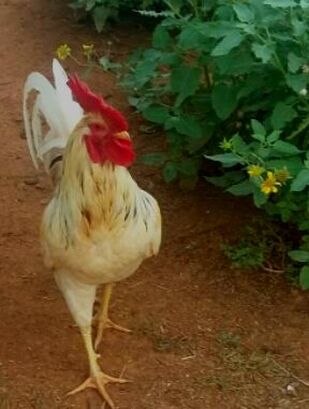 What age should a Rooster be Caponized at?

Caponizing a rooster should be done between 6-8 weeks of age.
​If you (or a licensed vet) caponize (remove testicles) of a rooster after 8 weeks of age the wound will need to be sutured with stitches to prevent the bird from bleeding to death.

How does a rooster act after it has been castrated?

Once a roosters testicles have been completely removed his entire demeanor will change.

Does a Caponized Rooster Gain Weight?

Roosters were historically caponized to make them gain weight and were fed a rich high fat diet of milk and porridge to help with weight gain. These birds are called Capon's and are sought for their rich tasting meat and large breasts. The weight of  the rooster is significant, whereas a typical standard size non caponized rooster may weigh in at 5 or 6 pounds and after caponizing at 6-8 weeks they are fed the high fat diet they can grow to be 8-10 pounds or more depending on the breed.

Recent study reveals the changes in a roosters behavior after castration and what happens when testis are transplanted into capon chickens. It also reveals that a birds testosterone levels are higher when in unstable environments, during breeding season, or when establishing territorial boundaries or in territorial disputes. "The study of hormones and aggression, and of hormones in general, can be traced back to the classic experiment of Arnold Berthold in 1849 (11). He removed the testes of immature male chickens (the castrated animals are called capons) and found a decrease in some secondary sex characteristics (comb, wattles) and male-typical behaviours (11). Capons did not crow, did not try to mate with females, and did not fight aggressively with other males. Importantly, Berthold also transplanted testes into capons. When a testis was transplanted, these subjects showed normal aggressive behaviour and secondary sex characteristics. If the transplanted testis was removed, then the animal behaved as a capon. Upon dissection, Berthold found that the transplanted testis had established new vascular connections. Berthold concluded that the testes release a substance into the blood which affects behaviour and morphology" Soma, K. (2006).

Is there another way to control a roosters behavior without castration?

Based on these findings, I have conducted a few experiments of my own. I do not have experience caponizing a rooster, do not have a vet in my area that will do the procedure, and do not feel confident enough to attempt the operation since there is a main artery right by the testis that, if nicked could cause the rooster to bleed to death. I have many roosters as most of you know already, that is how Chicken Heaven On Earth got started-rescuing roosters because nobody wanted them. So, the thought of caponizing all these roosters terrified me but I did come upon an alternative solution. I discovered that if the roosters are allowed to free range in a large enough area, are given their own hens and allowed to establish a relationship with them separate from the main flock but visible to the main flock, and provided with their own feed and watering dishes when they are introduced to the flock, that there is much less conflict and aggression amongst them. A rooster showing up by himself trying to get at food, water, and hens is asking for trouble, whereas, a rooster who arrives with his own hens, feed, and water, is politely ignored by the other roosters as long as he does not try to mate with one of their hens. Now, this method does nothing to control crowing but of course, I live in the country, so crowing is okay here. If I lived inside city limits I would seriously consider and find a licensed livestock and poultry veterinarian who could caponize my roosters. The main reasons most cities will not allow roosters is because they crow. Due to this fact, many urban chicken keepers are now looking for veterinarians to caponize their roosters so they can keep them.

Does A Rooster Need Anesthesia when being caponized?

It is recommended that your vet use anesthesia during the caponization process to prevent the bird from sudden movements during the surgery. Many people who have performed the surgery without anesthesia claim the bird does not react during the operation unless you accidently get the wrong place with the surgical tools, and then the bird will cry out, flop around or try to get away.

Is it cheaper to raise broiler chickens or capons?

"​Capon production could be advantageous for pastured poultry farmers. Cockerels are always in plentiful supply and usually quite a bit cheaper than pullet chicks. The actual operation—once one has developed the necessary skills and had sufficient practice—takes little time, and the follow-up care is routine. The grow-out is much longer than for a meat hybrid broiler, of course, so an adequate price to cover the additional feed and management input would have to be forthcoming to justify the enterprise. Aside from the surgery itself and the longer grow-out, though, there is no element in the project that would be significantly different from raising broilers" (Caponizing: Reviving a Lost Art. 2018).
References:
1. Video. Caponizing 8 week old roosters. (Jun 16, 2014). https://www.youtube.com/watch?v=pSUx5d31BKk​
2. Soma, K. (2006). Testosterone and Aggression: Berthold, Birds and Beyond. Journal Of Neuroendocrinology, 18(7), 543-551. doi:10.1111/j.1365-2826.2006.01440.x
3. Caponizing: Reviving a Lost Art. (2018). Themodernhomestead.us. Retrieved 9 August 2018, from https://www.themodernhomestead.us/article/caponizing.html