Expert studies and research has determined that chickens are much smarter than previously believed. See our featured video, studies, and research on this topic and you will be amazed. 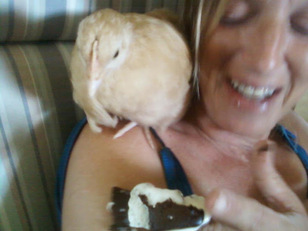 Rev. Penny Dean w/Goldie
Expert Studies Prove Chicken Intelligence
Chickens have cognitive abilities which are equal to mammals and primates. Dr. Lesley Rogers, Professor of Zoology at University of New England, Australia states that chickens have cognitive capacities that are equal to those of mammals and primates! “It is now clear that birds have cognitive capacities equivalent to those of mammals, even primates.”states Rogers LJ, The Development of Brain and Behaviour in the Chicken (Wallingford, Oxon, U.K.: CABI Publishing, 1995, p. 217).
Chickens can recognize and remember over 100 faces
“Dr. Joy Mench, Professor and Director of the Center for Animal Welfare at the Univ. of Calif. at Davis explains, ‘Chickens show sophisticated social behavior….That’s what a pecking order is all about. They can recognize more than a hundred other chickens and remember them. They have more than thirty types of vocalizations.’ "(Spector,2003).
Specter M, “The Extremist,” The New Yorker, April 14, 2003, p. 64.
Have Stable Social Groups, have 24 Distinct Calls, and are good at problem solving
Dr. Chris Evans, Professor of Psychology at Macquarie University, Australia states:
“Chickens exist in stable social groups. They can recognize each other by their facial features. They have 24 distinct cries that communicate a wealth of information to one other, including separate alarm calls depending on whether a predator is traveling by land or sea. They are good at solving problems. ‘As a trick at conferences I sometimes list these attributes, without mentioning chickens, and people think I’m talking about monkeys,’ Mr. Evans stated.
Studies indicate that Chickens can Understand more than small children
Perhaps most persuasive is the chicken’s intriguing ability to understand that an object, when taken away and hidden, nevertheless continues to exist. This is beyond the capacity of small children.” Grimes, 2003).
​Grimes W, “If Chickens Are So Smart, Why Aren’t They Eating Us?” New York Times, January 12, 2003.
Chickens have Distinct Personalities, are organized, have complex behavior patterns, and learn well
Dr. Bernard Rollin, Professor of Animal Science at Colorado State University
“Contrary to what one may hear from the industry, chickens are not mindless, simple automata but are complex behaviorally, do quite well in learning, show a rich social organization, and have a diverse repertoire of calls. Anyone who has kept barnyard chickens also recognizes their significant differences in personality”
Rollin B, Farm Animal Welfare: School, Bioethical, and Research Issues (Iowa State University Press, 1995, p. 118).
​Scroll down to see our featured video and more studies on chicken intelligence. 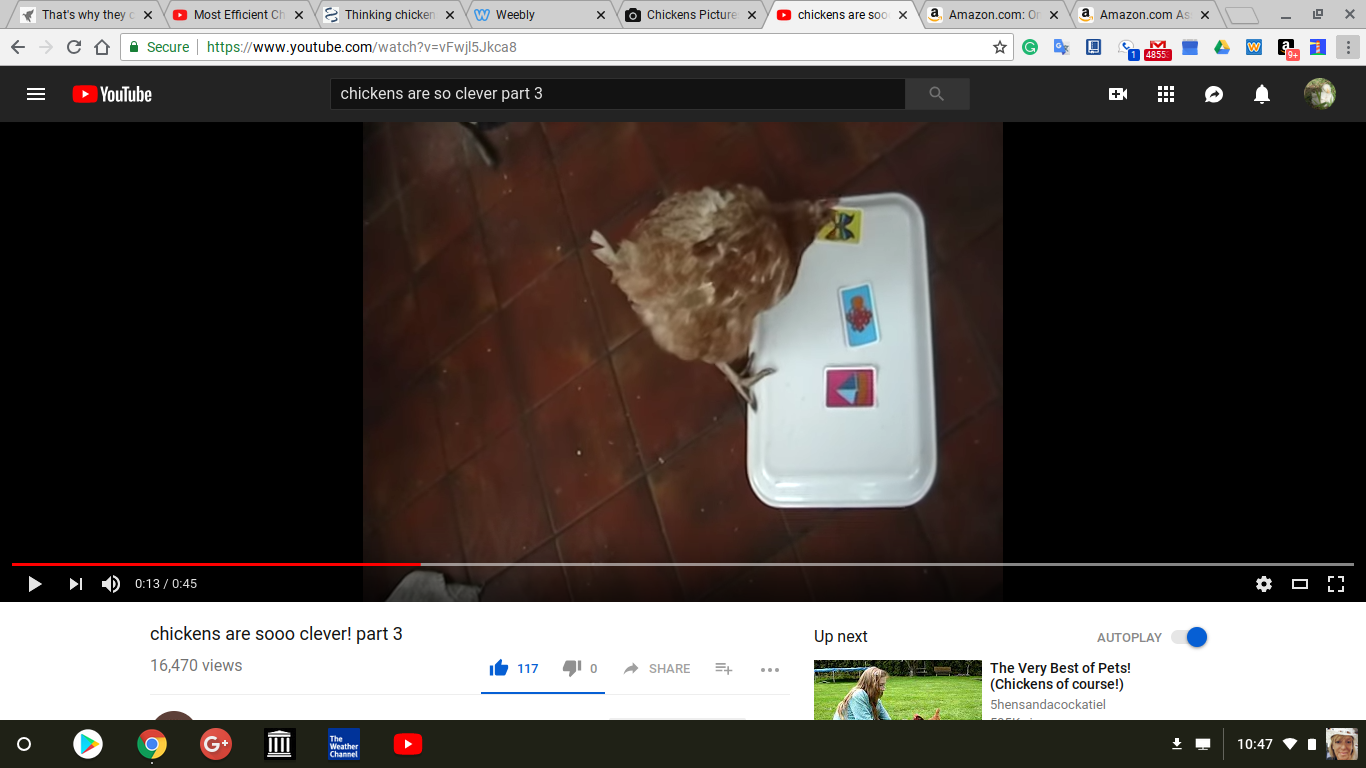 In this video Topsy the hen gets a reward for identifying a  specific picture and no matter where the picture is moved-Topsy can find it! Now this is one very smart hen! If  you would like to see more from Solarbats1 you can subscribe to their youtube channel here: ​https://www.youtube.com/channel/UCxECz-_P3ePFDH-xn43pq8A

"The brains of birds have historically been viewed as simpler and more primitive than those of mammals. However, that assumption about avian brains has now been overturned by more recent studies showing that there are many functional similarities in the brains of birds and mammals, allowing for similar cognitive abilities. In particular, the avian forebrain (the part of the brain involved in problem-solving and other higher-order cognitive capacities) is actually derived from the same neuroanatomical substrate as the mammalian forebrain, providing more potential evidence for similar cognitive capacities in the two groups (Jarvis et al. 2005) (L. Marino, 2017).

A double minded man is unstable in all his ways. James 1:8
References