Things That Can Poison Your Chickens

Chickens who suddenly appear sick with no signs of being injured may have been poisoned and if you are not careful you may be the one who poisoned your birds without realizing it. Moldy feed, mishandled feed, and dirty water are the most common reason chickens get sick. However, there are several other ways your chickens could be poisoned listed below.
​The following is a list of most common ways chickens and other poultry get poisoned.

Things that can Poison your chickens 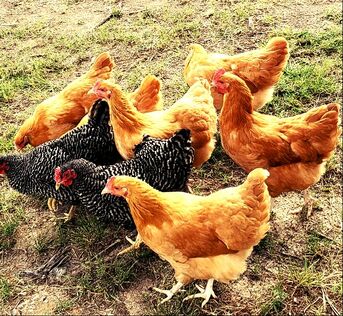 Hen Photo submitted by Kim Baker. 2020
Aflatoxins can kill your chickens:
A common fungal contamination of poultry feed which is often caused from wet bedding and wet feed getting high moisture levels usually from rainy weather or tropical conditions.
What is Aflatoxins?
Aflatoxins are poisons which can be made by  some strains of a fungus called Aspergillus flavus.
Where does Aflatoxins come from?
​Tropical conditions, rainy weather, wet feed and bedding give this fungus a perfect opportunity to grow. Contamination of poultry feed by this fungus is fairly common. These poisons affect the birds liver, immune response to some diseases (thrush, sour crop, coccidiosis and others) is reduced.
Ducks, geese, and turkeys are very susceptible to Aflatoxin poisoning too.
How to prevent Aflatoxin poisoning?
​Change feed out daily, remove uneaten food, wash and dry food dishes.
Salt:
Salt Salt poisoning, caused by common salt, is usually found in birds fed food scraps. The symptoms are increased drinking and diarrhea. Salt poisoning usually affects young birds.
Ammonia:
Ammonia The high humidity in the Northern Territory (NT), particularly in the Top End, may cause high levels of ammonia to be present in poultry sheds. This is easily detected by smell and, if not removed, may lead to respiratory problems and sometimes, severe conjunctivitis (ammonia burn). If the litter in the shed is kept dry and clean and the shed is well ventilated, ammonia should not be a problem.
Lead:
Symptoms of lead poisoning are loss of appetite, drowsiness, paralysis, convulsions, diarrhea and sudden death. Check the area for old paint products, motor oils, old batteries and buckshot.
Plants:
The seeds, (such as apple seeds or Avacado seeds) from fruit or leaves of some plants are poisonous at all times or at a specific stage of growth. Poisons can be found in some garden plants and weeds such as: ​"Cases have been recorded (not in the NT) of poultry being killed by poisonous seeds in purchased grain A number of other plants present in the NT, while having no record of toxicity to poultry, have poisoned other stock and contain substances which may be harmful to poultry. An example is ironwood (Erythrophloeum chlorostachys). There is no evidence that this tree, which is common in the Top End, is toxic to poultry but it is toxic to other livestock and to humans in very small doses and young shoots might attract birds which have no other green pick. A diagnosis of plant poisoning requires careful recording of symptoms, presentation of sick or freshly-dead birds, evidence that suspect plants or their fruits or seeds have been eaten and specimens of the suspect plants" (2018. Nt.gov.au. Retrieved 4 April 2018,1).
Botulism (Limber neck):
Botulism is caused by the toxins (poisons) produced by the bacterium Clostridium botulinum
Can be found in: Fly-blown material is particularly toxic because the toxin is concentrated in the maggots.
Symptoms of Botulism in chickens and other poultry: How to Control a Botulism Outbreak:
Remove possible sources of toxin
Remove sick birds from the flock
Burn dead carcasses
Treatment for Water Fowl:
​Water fowl showing early symptoms may be treated by placing birds in clean, running water and feeding wet bran mash.
Pesticides: When treating chickens and other poultry for parasites,  you must be sure to follow the exact dosage and instructions listed on the packaging. Wrong dosages can harm your birds. Some chemicals used for treatment may appear in the eggs or meat of the birds and may persist for some time. In such cases, a period must elapse after treatment before meat or eggs are consumed. This is the 'withholding period' which is indicated on the container and must be observed. Birds should not be killed for eating during this period and all eggs laid should be discarded. © Northern Territory Government Page 6 of 6 When poultry are allowed free range, particularly in an orchard, they may be exposed to a variety of pesticides, which are being used on the trees. Some of these pesticides are likely to be toxic to the birds or, even if not affecting the birds themselves, may be taken up and concentrated in the meat or eggs. If the content of a pesticide is high in the meat or eggs, their consumption is dangerous and as such, their sale is illegal. Usually, there is no information on the container of such pesticides about possible effects on poultry or necessary withholding periods. The only safe course is to prevent poultry from places where pesticides are used. Drift of pesticides to poultry must also be avoided.

Treatment for Accidental Poisoning of Chickens

Bran Mash
​Activated Charcoal Gel
I have used Activated Charcoal Gel on chickens who were poisoned by accident with much success. I used just a small amount squeezed from the tube, placed it on my finger and put it in the birds mouth. It absorbed the toxins and the birds made a quick recovery
UAA Gel (Universal Antidote Gel) Used in the treatment of accidental poisoning of cattle, horses, goats, dogs and cats as emergency first aid. Contains activated hardwood charcoal and kaolin in an aqueous gel suspension. Dosing: For small animals dose at 1 to 3 mL per 2.2 lbs of body weight. Repeat the dosage after 1 to 4 hours or until symptoms subsides. For cattle or horses give 300 mL. Follow up doses at 8 hour intervals as indicated. Brand: Vedco Type: Gel Size: 300 mL Ingredient: Hardwood Charcoal, Kaolin Condition: Poisoning

Dirty litter and bedding left unchanged for 8 weeks (2 Months) can cause your chickens to get very ill with a multitude of various bacterial and fungal infections and can even cause death. If possible your chicken coop should be moved at least once every 7 weeks to fresh ground.

Green or Cloudy Water can kill your chickens

Studies show that green, cloudy or dirty drinking water can make chickens very sick from coccidiosis and other bacterial illnesses. If you have chickens and ducks they should be kept in separate areas so the ducks cannot get into the chickens water as ducks love to play and poop in water which can cause chickens to get sick. Don't keep water containers in direct sunlight as the water will turn green and green water is deadly to chickens. If you put vitamins in your bird's water you need to change the water daily. Make sure you regularly wash waterers to make sure there is no slimy build up inside them. Chickens can dehydrate in hot summer months and they will not drink hot water so be sure to keep their water in a place where it will stay cool, (you can recycle plastic soda bottles and milk containers by freezing water in them and placing the frozen containers inside your chicken waterers). Likewise, chickens cannot drink frozen water during winter months so water should be kept in a place where it will not freeze or you can use water heaters (livestock water heaters, aquarium heaters, hot water bottles, etc.) to prevent the water from freezing See more about watering your chickens

Never, ever use mouse or rat poison of any kind in occupied chicken coops. If your chicken eats the poison it will kill them. If you have a severe rodent infestation and really want to use the poisons to get rid of them you will need to house your chickens in a different coop for at least two months after the poisons are used and then the coop should be thouroughly cleaned and disinfected before allowing chickens to return. Cleaning and disinfecting the coop regularly is important in keeping rodents away as they like to urinate on the coop and nest boxes to mark their territory. Rodent urine can make your chickens sick and rodents attract snakes which are another threat to your chickens. Snakes will eat eggs, baby chicks, small breed chickens such as bantams and silkies and larger snakes have even been known to swallow whole standard size chickens. When spraying coops with approved for coop use mite and lice treatments be sure to follow the directions on the packaging exactly and the same goes for mite and lice treatments for the birds themselves. See links to more information on chicken health below.
References:
1. ​(2018). Nt.gov.au. Retrieved 4 April 2018, from https://nt.gov.au/__data/assets/pdf_file/0016/233062/non-infectious-diseases.pdf
2. ​Melia azedarach. (2018). En.wikipedia.org. Retrieved 16 May 2018, from https://en.wikipedia.org/wiki/Melia_azedarach
3. 9 Toxic Foods You Should Never Feed Your Chickens. (2018). YouTube. Retrieved 12 September 2018, from https://www.youtube.com/watch?v=H2Tn0Omj9iM