The Dutch Bantam (a true bantam breed), is one of if not the sweetest, elegant, and most likely the smallest chicken in the world, usually males weigh less than 20 ounces and females usually weigh less than 18 ounces. They are good egg layers, go broody easily, and lay very small eggs. 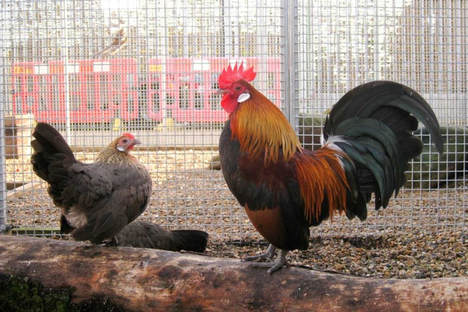 Gold Partridge Dutch Bantams. Photo courtesy of mudchute.org
Appearance:
Medium sized single comb (Males have only a slightly larger comb)
Almond shaped white earlobes
Males stand upright and jaunty puffing out their breast in almost animated display
Females also stand upright but are not as pronounced as the male bird
All have slate color legs with the exception of the Cuckoo and Crele varieties which have dark spots of color
"Back very short, broad at shoulders, slightly sloping, saddle short and broad with abundant hackle running smoothly into tail coverts. Breast carried high, full and well forward. Wings relatively large and long, but not too pointed, carried low & close. Tail upright, full & well spread, with well-developed and curved sickles" (Dutch Bantam Club of Great Britain). Unlike most bantam breeds the Dutch Bantam does not have a standard sized counterpart. Scroll down to see more and watch the Dutch Bantam video. 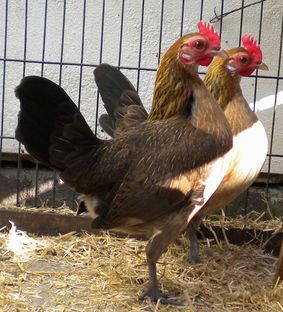 Gold Partridge Bantam Hens
Origin & History: The Dutch Bantams recognized by the American Dutch Bantam Society we know today arrived in Holland in the 17th century brought by Dutch seaman trading with the East India Company close to Indonesia. The Dutch Bantams were used for meat and eggs during the long voyages while on the trading routes between Asia and the Western world. During this period all small birds were called bantams regardless of whether or not they had come from the Bantam Islands. Bantam birds gained popularity primarily because of some customs of European landlords during this period who commonly accepted eggs in exchange for rent. The landlords preferred large eggs and since the bantams produced very small eggs the tenants were able to keep them for themselves. These Dutch birds were imported to America shortly after World War II and were shown in Eastern shows during the early 1950's. However, the bird fanciers of this period did not favor the breed and soon they were no longer shown in the exhibitions, most likely due to lack of interest. It is suspected the breed was lost or bred with other breeds and began to lose their fertility. They were imported again to Wisconsin and Tennessee in 1969 and 1970  and are most likely the ancestral lineage of the Dutch bantams presently being bred in the U.S. and Canada. Interest in the birds increased and the first American Dutch Bantam Society was chartered August of 1986

First Standardized: The Dutch Poultry Club first standardized the Dutch bantam in 1906.
Currently there are more than 20 varieties of the Dutch Breed Bantam.
"Old Dutch paintings of farmyard scenes often included fowl of striking similarity to the appearance of present day Dutch bantams. A British painting of 1865 also depicts fowl of close resemblance to Dutch birds of today...The breed rapidly became very popular in Holland as it was possible to accomplish good conformity of type, color, comb and earlobes. Today the Dutch bantam is one of the most popular breeds in Holland, and is also a very popular breed in England...Some of the primary goals of the club are promotion, education and continued standard recognition of Dutch bantams in the standards of the A.B.A. and the A.P.A. The club prints a quarterly Newsletter to promote communication among the membership of the breed and the club (Breeds of Livestock Department)". 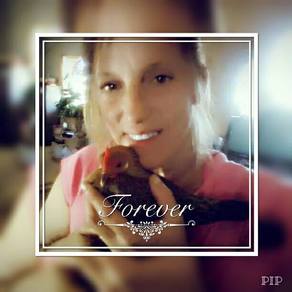 Rev. Penny Dean & Ellie (Gold Partridge Dutch Bantam)
Dutch Bantams are quite hardy, active, small, and lively yet gentle and affectionate. Make great pet chickens as they develop an obvious attachment for their owners and their small size. "I do have quite a bit of experience with the gold partridge variety and can honestly say they are very affectionate, seem to enjoy being held, and love to get attention" (Rev. Penny Dean).
"At full size, a Dutch bantam cockerel weighs only 500-550g. It is one of few “true bantam” breeds, meaning it has no large counterpart. As their name suggests, the breed originate in the Netherlands where they are called Hollandse Kriel. The breed standard for Dutch bantams includes a “upright & jaunty” carriage" (Mudchute.org).
​

Most Common Dutch Bantam Varieties Found in the U.S.

This video from Jules Huhner Farm shows how Dutch Bantam's look in each stage of development from 2 weeks of age to adulthood.