Find out about Rooster's the forgotten bird-from the time they are hatched-nobody seems to want them because they can't lay an egg and because they crow. Everybody these days wants chickens but nobody wants the rooster's which is one reason Chicken Heaven On Earth was originally started-to find homes for these intelligent sweet birds who need homes just as much as hens do, if not more so. 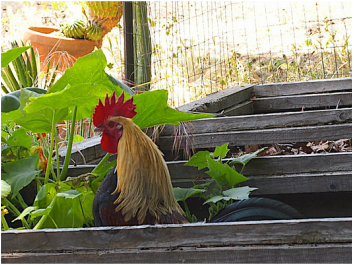 When commercial egg factories are producing eggs they only use hens. The males are often thrown in the trash  while they are still alive. and later they are gassed, sometimes days later. Some use an alternative method and sell the male chicks to stores. People buy them and are often not allowed to keep them due to current city ordinances. The poor roosters are often abandoned because people cannot afford to pay the fines and undergo intimidation from animal control agencies until they get rid of the rooster.Most people do not know where to take them since most animal shelters will not take them except when the owners refuse to get rid of them. Most animal shelters cannot find homes for the roosters and end up killing them.
The rooster's only chance at survival is to be bought in the store
Thousands of male baby roosters are sold to stores around Easter time in the hopes that someone will buy them and give them a good home.
There are less farms available to take on more than a few roosters
Many city ordinances do not allow roosters
Cities need to allow homeowners to keep roosters as pets because there are not enough farms to take them and it is not fair to kill them just because they are male
Problems that have become apparent associated with selling male baby chicks in the stores
Suppliers often color the chicks which is dangerous and can kill them
Most if not all are male chicks
Buyer's are not told the chicks are male or that they will start crowing in a few months
No guide is supplied with the chicks explaining how to take care of them properly
Buyers are not informed about city ordinances at the time of purchase:
Many city ordinances do not allow chickens inside city limits and some specifically do not allow roosters
Many times owners of Easter pets love them very much and do not want to get rid of their pet rooster but the city accesses fines until they do
Some owners find out that the chick is a rooster and decide to get rid of them by 'Setting them free' which is a death sentence for the rooster
People who own or rescue roosters are forced to keep their roosters quiet even though they are no noisier than a barking dog and roosters are more accurate than dogs when detecting prowlers.
More About Roosters