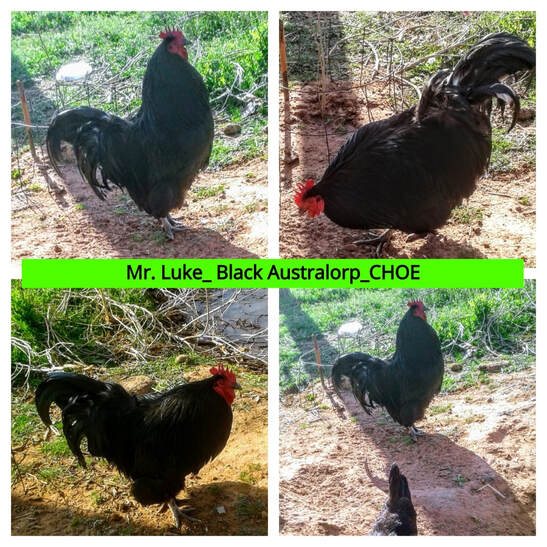 Mr. Luke representing Black Australorp Facts for CHOE
Black Australorp chicken breed facts:
Class-English
Origin-Australian
Primary use: Dual purpose breed
​Egg Production: Approx. 250 per year
Egg size and color: Large brown eggs
Australorp chickens were renowned for their egg laying capabilities. "In 1902, during Australia’s winter season, the Hawkesbury Agricultural College held a six-month egg-laying contest between various breeds of chickens. With 41 pens in all, Black Orpingtons took seven of the thirteen top placements. This was the first of many egg-laying contests in which Australian-bred Orpingtons would compete. By 1922-23 “Australian Laying Orpingtons” were setting records. At Geelong, Victoria, a pen of six “Australorp” hens set a world record by laying 1857 eggs in 365 days – an average of 309.5 eggs each. At the Grafton contest in 1923-24 an Australorp hen laid 347 eggs in 365 days. Soon after a hen of the Burns bloodline broke the world record, laying 354 eggs in twelve months. Another hen set a new world record when she laid an amazing 364 eggs in 365 days (The Livestock Conservancy)".
Black Australorp Physical Appearance:
Black Australorps have black shiny plumage which reflect iridescent hues of purple and green in the sunlight.
Ear lobes:
​Bright red, small and elongated.
Legs:
Slate colored. Clean legged.
Feet and toes:
Bottom of feet are white or pinkish white. Four straight and well spread toes
Comb:
Single comb which is bright red in color
Personality:
​Docile in nature. I would normally say Australorp's are docile however, from personal experience with Mr. Luke (pictured) who was always docile when he first arrived and would run from other roosters,  I quickly discovered that Australorp roosters can get aggressive if they do not have enough hens, if there are too many roosters, when protecting their hens, or if someone is being aggressive with them, often directing their aggression toward their care taker. When more hens were added and all stress factors were removed Mr. Luke returned to his normal sweet docile self.
Hardiness:
Hardy in cold temperatures
History:
"APSC from APS 1st Edition:
Large Importations to Australia of William Cooks original strains of Black Orpingtons were made in the late nineteenth century. As the looser feathered exhibition-type Orpington evolved, the original birds were bred on in Australia as superior layers and meat birds and became known as Utility Black Orpingtons. Some Australian Langshan blood was infused. The early days of egg laying competitions in Australia saw these birds establish records un rivaled by any other heavy breed. In the 1920s, stock was exported back to Britain.
The name Australorp was adopted in Australia by 1930. The Australian standard, agreed to in 1949, had ensured the breed retain its usefulness as a superior layer and table bird.
Australorp bantams have been developed to a high standard. Like their large counterparts, they are useful layers, reliable setters and good table birds"(3) .
The Difference between Australorps and Jersey Giants
​Though both chicken breeds are quite similar in physical appearance there are some differences. The bottom of the Australorp feet are whitish in appearance whereas the bottom of the feet of the Jersey Giant is yellow in color. There is a difference in egg color as well, Australorp eggs are large brown eggs and Jersey Giant eggs are also large and brown but often have dark brown specks on them.