Why You Should Never
​Feed Chickens Raw Dough
​

The true story of five baby chicks rescued after being found drowning in raw bread dough. I have never seen baby chicks so determined to survive but survive they did! NEVER give your baby chicks raw bread dough. Baby chick's found in a bucket of dough, rescued by Chicken Heaven On Earth. It was a rough battle but these little guys survived and thrived! See their beautiful story below.

The Doughboy's fight for life & win! 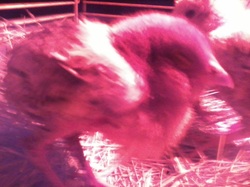 Doughboy-Brandy 2012
We went to check on a neighbor's chickens because he called and asked us to look after his chickens as he had to go to his mother because she was ill. What we found when we arrived put us into a state of immediate action. When we arrived most of the chickens were fine but there was a stress call from a few of the roosters and frantic peeps could be heard, we followed the roosters and motherhen to the sound of the stressed peeps, only to find five three-four day old chicks stuck in an Easter basket full of a dough-like substance. Later, we found out it was a special mix of flour and water that the owner made for the chicks. Unfortunately, the little peeps jumped in the mix and sunk into it like it was quicksand! The dough was too heavy for their tiny limbs. We removed them from the dough right away and rushed them to Chicken Heaven On Earth. See photos, video and updates below.

Chicken Heaven On Earth Staff Fight to Save The Doughboy's lives 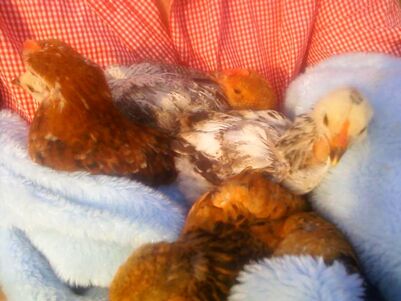 The Doughboys Survived!
Once the Doughboys arrived we were in a frantic, losing battle to remove the dough as quickly as possible. We knew we could not put them in warm water to remove the dough because they would die. We tried giving them a warm dirt bath but their body temperature was too cold, they were shivering, laying limp, and could not walk. In a desperate attempt to save their lives we placed them under a heat lamp to get them warm. They were very stressed, peeping, and uncomfortable. We decided to let them rest and gave them starter feed and fresh cool water to drink. We had no idea how long they had been buried alive in the doughy substance but they appeared to be dehydrated as they gulped down large amounts of water.
The dough reacted quickly to the heat from the heatlamp and the chicks screamed out in terror as it began to harden on their bodies, legs, necks, and wings. The smallest chick we nicknamed "Shorty" did not look like he would make it as he froze like a statue when the dough began to harden. He had more on him than the others. Slowly we began the process of removing the hardened dough using a damp warm cloth to loosen it and remove it. Unfortunately, their soft downy feathers came off with the dough. It was a long, arduous, and heartbreaking task. Finally, enough was removed from all of the chicks that they could comfortably walk, eat, and sit. Whether they would make it through the night we were unsure because they were weak and very stressed. We tried to coo at them and kept them warm.
The next morning all five chicks were alive and well up pecking at their feed and drinking water. We gave them some moist cornbread crumbs for a snack and they happily gobbled it up. They looked so funny with all of their feathers gone on their underbellies and legs. Some dough still remained and was slowly removed in the next few days. We were unsure whether the feathers would grow back. At the end of the first week their was new found hope for the sweet little chicks who are now quite skittish but otherwise in good health. New feathers have begun to grow in the bald spots. Shorty took a bit longer than the others to recover as the dough had embedded so deeply on one wing it was impossible to remove without hurting him and it dried with his right wing jutting out to the side, he could not lower it into a normal position. We feared it may be broken. X-rays revealed it was not. Shorty has since made a complete recovery and has total use of his wings. We affectionately named the chicks "The DoughBoy's". Now they have names of their own, Brandy, Butteria, Brainy, Trouble, and Shorty. Right now, we are watching them as they scamper around in the yard and garden finding little bugs too snack on. I did not know they were all boys but as soon as I figured it out, that is when we started calling them "The Doughboys"

The Doughboy's are doing great except one of the Doughboys turned out to be a girl..the one we called Brainy because she was smart enough to pick the dough off of everyone. Her new name is Krazy Mary-she is wild and we can't get near her but she gets in the hen house every night and she comes down the runway every morning at roll call. If somethings wrong she will come up by my front door and squawk..gotta love her. They are so beautiful.

The Doughboy's Progress in Pictures

We have successfully found good homes for all of the Doughboys except Mr. Brandy who is now our Kingpin and runs our Trailer House Flock with more than a hundred hens and Krazy Mary who has joined the Chicken Heaven On Earth Flock.

Update on the Doughboys-Mr. Brandy 2018 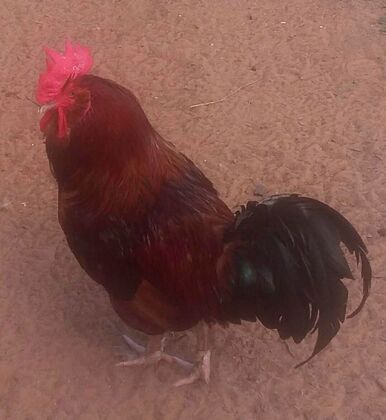 Mr. Brandy 2018
Mr. Brandy ran our largest flock of hens of all the roosters flocks here. He was so tame you could just walk up and pet him, he was happy to just sit on your lap and be petted. He made sure all of his ladies were in every night and would even wait until all of the other roosters brought their ladies in before he would enter the coop. Mr. Brandy never lost a hen to a predator. His bravery was demonstrated when a neighbors pit bull got in the yard and went chasing after his hens. Mr. Brandy jumped on the pit bull's hind side spurring him with force, the pit turned to Mr. Brandy. Luckily I had heard the commotion on the security cameras and had seen the dog chasing the hens, I arrived in the nick of time as Mr. Brandy had no intention of backing down and he was no match for the dog. I grabbed the garden hose and sprayed the dog and he took off running. Mr. Brandy had sustained a pretty severe bite but that didn't stop him from proudly returning to his hens, despite my attempts to stop him. After checking his flock, he returned to me, bleeding and looking to me for help. I grabbed him and took him to my emergency room (my kitchen) where I checked, cleaned and treated his wounds, applied a triple antibiotic and gave him some hot dogs and yogurt for a treat. I put him in a pet carrier for the night and he was none to happy about that, he wanted to return to his flock but exhaustion over took him and he slept. In the morning, I returned him to his ladies and watched carefully to see if any of the other roosters would try to take advantage of his weakened state but Mr. Brandy stood tall as if nothing was wrong and had no problems reentering the flock. He recovered from his injuries but began to fall ill every few days. Fecal tests, x-rays, and blood tests revealed nothing out of the ordinary but Mr. Brandy's health began to fail. I knew something was wrong but he had no symptoms of being ill other than listlessness and not moving around all happy like he used to. I knew he was getting old for a rooster but I suspected that he had some injury that so far we were unable to detect. With more than 100 hens under his constant watch and care Mr. Brandy gradually allowed many of his hens to go off with other roosters. He started just staying in one area with 15 of his best girls who catered to him, one even brought him a cricket. On March 19, 2018 Mr. Brandy was on his roost for the night when I came to close the hen house up. I went to pet him like I always do and suddenly he started coughing and wheezing. I picked him up and rushed him to the house, by the time I got there, he started seizing. I revived him twice with oxygen but it was obvious the old man's time had come. He flopped one last time and died in my arms.
​RIP Mr. Brandy you were a fine man rooster and I will always remember you and love you. Mr. Brandy's girl's wait each night for him to call them in, standing by the hen house door. Other roosters have tried to take them on and escort them in but his 15 main ladies remain still waiting for him to return. A young rescued bantam rooster named Mr. Freckles stands nearby, waiting patiently until each of the hens gives up the wait and comes in. In the morning young Mr. Freckles waits until each of Mr. Brandy's 15 dedicated hens goes out, he finds them bugs and treats but doesn't try to mate with them. Mr. Brandy and Mr. Freckles have always respected each other's hens, unlike some of the other roosters who were steadily stealing away the hens when Mr. Brandy fell ill.  I feel like Mr. Freckles will take care of Mr. Brandy's older non egg laying hens. He will never replace Mr. Brandy but Mr. Freckles will finally find his place in the flock. Oh! and least I forget, Krazy Mary-she is still here. She is getting on in age and does not lay eggs anymore but she gets in the nestbox every day just the same but once she gets in she will not get out, not even after I collect the other hens eggs she is setting on. Whenever I want to hatch eggs, I just leave them in her favorite nest box and she will happily hatch them. Right now, she is setting on a few of Mr. Brandy's eggs..so we shall see if we get another fluffy faced Brandy Jr. when they hatch out. See Updates below.