Chickens Can Anticipate the Future

Chickens think before they do things, worry if things are not right and systematically search for things which indicates extreme intelligence. ​Scientific studies say chickens exhibit behaviors that demonstrate self control, can anticipate the future and may even worry!. 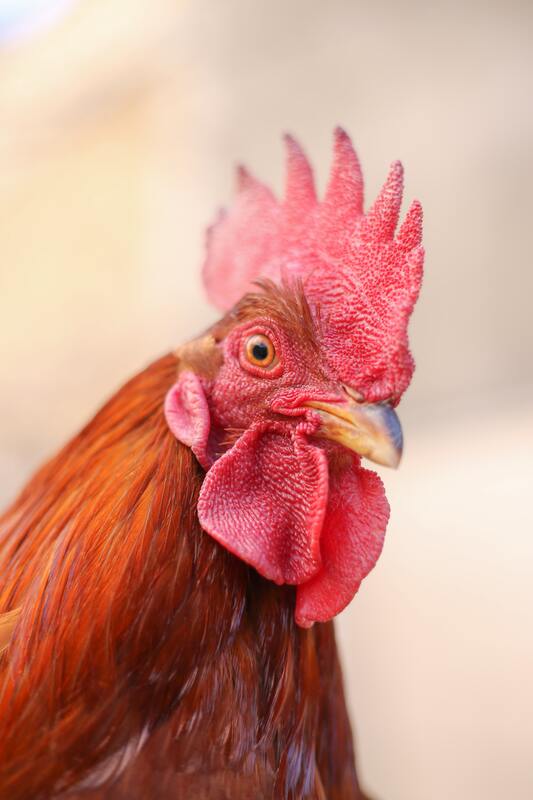 Curious Rooster Photo Courtesy of Sahand Babali on Unsplash
Chickens can worry
If you don't think chickens worry try putting a hen in a cage and set her nest box right outside of it. The hen will systematically check the cage bars to see if there is some way she can get out.
Chickens think before doing something
Chickens think before they do something which means they anticipate things. Watch a chicken who decides to jump up on a branch or up to a perch, they will look at the ground, look at the branch, look around, and do it several times before they make the jump. The chicken is judging the distance which indicates that they think about what they do before they do it.
CHOE study reveals chickens can be taught to do tricks.
In the past people thought that chickens were just mindless creatures who could do nothing but eat and get eaten. Our studies here at CHOE indicate that chickens can be taught to do tricks such as climb the ladder, peek-a-boo, and play dead. We have also managed to successfully paper train several chickens. Chickens can also discern colors and shapes. When training chickens a piece of paper of a certain color or shape can be used. The chicken will peck at that color or shape when it is in a group of different colors and shapes. If the color or shape is hidden a trained chicken will wait until it sees the one it was trained to pick. This proves they anticipate things. More proof that chickens anticipate the future, anyone who has chickens knows how excited they get when they hear the feed cart or the feed bag or bucket. They will run to it and chirp excitedly until the feed is dispensed. Chickens develop friendships and relationships with each other preferring to sit with or find food with the same other chickens, just as a rooster will claim his particular hens and fight with any rooster who tries to court them. Chickens think about things other than food and they anticipate the future.
​See more below.

Featured Video: This Chicken is a Star! Clicker Trained Chicken

An adorable and very smart young girl taught her chicken to choose the card with the yellow star as part of a school project. She got a well deserved A for her efforts!

If Chickens are so smart, Why aren't they eating us?

Dr. Chris Evans, Professor of Psychology at Macquarie University, Australia “Chickens exist in stable social groups. They can recognize each other by their facial features. They have 24 distinct cries that communicate a wealth of information to one other, including separate alarm calls depending on whether a predator is traveling by land or sea. They are good at solving problems. ‘As a trick at conferences I sometimes list these attributes, without mentioning chickens, and people think I’m talking about monkeys,’ Mr. Evans said. Perhaps most persuasive is the chicken’s intriguing ability to understand that an object, when taken away and hidden, nevertheless continues to exist. This is beyond the capacity of small children.” Grimes W, “If Chickens Are So Smart, Why Aren’t They Eating Us?” New York Times, January 12, 2003.
More About Chicken Intelligence