Roosters
​Everything You Didn't Know About Them

Here you will find everything you need to know and may not have known about roosters. Such as, how to introduce a new rooster into your flock that has a rooster, how to keep roosters quiet, how roosters are as pets, using rooster's as home alarm systems, the homeless rooster, reasons to adopt a rooster, caponizing Roosters, cuddling Roosters, rooster mating rituals, rooster art, and most likely quite a few things you didn't know about them.

A Few Facts About Roosters 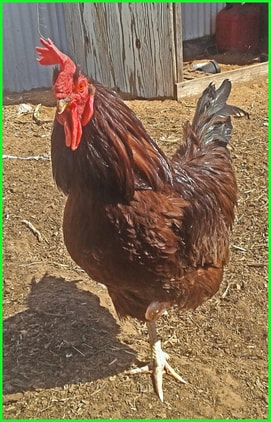 Buddy the Rooster at CHOE
oRooster's are intelligent, dominant, flirty, and very handsome.
Their plumage is usually much more colorful than their female counterparts as is the case with most male birds of any species.
Roosters can bond with their owners but their main happiness is to have many hens to dote upon and protect.
Though the rooster is ill equipped to protect his ladies from most vicious predators he will generally sacrifice himself before allowing anything to happen to the hens he loves.
​Roosters can be tamed and trained, even extremely aggressive ones previously used in cock fighting can become loving and docile with patient care, love, and training. (We know-we've done it).
Roosters can become offended and even aggressive if ignored, or not acknowledged by someone approaching his hens.
​Young roosters can get too rough with their hens.
Roosters may act aggressive if someone approaches too quickly or if a stranger approaches his hens.
Roosters can be affectionate and loving if given lots of attention and tender loving care.
Roosters have a natural instinct that causes them to crow early in the morning.
Roosters will flap their wings if a threat is near.
A rooster will dip one wing down and circle a hen he is particularly enamored with.
If you are thinking about getting a pet rooster you may wish to choose smaller breed roosters such as Bantam, Serama, Cochin, or Silkie as they tend to be less aggressive. It is best to raise a pet chicken, particularly a rooster as a baby chick or get them as young as possible.
​See hot topics about roosters below.