How to Protect Your Chickens
​From Foxes

List of various ways  you can protect your chickens from the crafty fox plus best buys on fox deterrents and traps. Protecting your chickens from foxes and other predators takes more than one kind of predator control. Make a battle plan and get what you need to keep your chickens safe. Here are the most popular methods and my most successful methods (I get real serious when it comes to predators looking for a free chicken meal at my place).
Set traps-The best way to get rid of a fox is too catch him. If you use live traps and call animal control or your local animal control they will most likely release the fox somewhere and he or she will become someone else's worst nightmare. If you catch and kill the fox, one problem solved but there are several problems with this. One it may be illegal to kill the fox where you live and if you see one fox, there are several more hanging around that you don't see.  Be very careful to use protection on your hands or use a stick pushed through the handle, when handling a live trap with a wild animal trapped inside they will most likely try to attack you when you pick up the cage. They have been known to bite and scratch people who grasp the handle to move the cage.
Fox urine- Some people swear fox urine will deter a fox but I also know several people who have tried it and it actually attracted foxes to their property.
Snares-Snares will catch a fox but then you have to figure out how to dispose of the fox because you won't be able to safely approach and capture it like you can a live trap. Snares are  very effective if used at the proper height when it comes to catching fox, raccoon, skunk, possum, and other small animals. Most states have regulations concerning the use of snares-make sure you find out what they are for your state before setting up your snares. ​
How I keep foxes away from my chickens
I live right on the river in a high predator zone. I have seen foxes just wandering around in broad daylight looking for a meal and not far from my house. Today, I went to town and not even 200 feet down the road I had to pull over because there was a whole flock of white ducks brutally slaughtered with head missing, bite marks in the chest, broken necks, and most were just killed and not eaten.  Foxes will kill just to kill. When I came back from town I noticed one lone duck moving. I stopped and rescued it. It's leg is broken and it has multiple injuries.  I am doing every thing I can to save it and shudder to think of the horror it must have went through watching it's whole family get murdered.  After making the injured duck comfortable and treating it's injuries I proceeded to check, double check, and reinforce all of my chicken and duck coops. Here is what I use and have never had a predator get at my chickens or ducks since installing them (over 8 years now).
Double wire on coops
I use chicken wire and fencing doubled up on coops and runs to help protect my chickens from foxes and other predators. I have even caught a snake stuck in between the doubled fence.
Predator control lights
These work extremely well in combination with other methods. The catch to using predator lights is that you need to periodically move them at least once a week. Foxes, raccoons, owls, and other predators are smart enough to know that the same predator will not be in the same place every single night.
Motion detection lights
Motion detection lights (especially one's with a siren) will frighten a fox away and the siren will alert you that your chickens need assistance right away. There are many solar powered motion detection lights available.
Electric fencing
I prefer solar powered electric fencing but I also advise electric back up just in case the solar fails.
Buried wire fencing
12" deep all around the coop fence and run and on any property fences (they can still get under gates easily). One problem with buried wire fencing is that it will degrade over time. Put a layer of sakrete concrete on the buried fencing to prevent predators from digging under your fencing.
Cats
Foxes and cats tend to ignore one another but in a confrontation between the two the fox will usually back down when the cats claws come out. I have 10 cats running around on my property. Most predators do not want to come here when they see all those eyes looking at them.

Dogs
​I have not had much luck with large dogs but I have 3 small dogs who make a lot of noise if any animal makes an approach. Foxes generally will not come where a bunch of noisy dogs are. In my experience, Foxes will call out, whoop, and scream warnings to other foxes. They don't like dogs of any size, however, female coyotes who also warn their pack are brutally deceptive and will lure male dogs who are not fixed away and then the coyote pack will kill them and the entire pack will eat the dog.
Donkey
I have a gelded male donkey who literally patrols the perimeter of my property, especially at night. Donkeys are pack animals  and if you only have one donkey they bond with whatever animals you do have and that becomes their pack and the donkey will protect them. I have seen my donkey run wildly and kick his feet in the air circling my whole 2 acres when he sensed a predator was near or a storm was coming. Once it was a  chicken killing pitbull dog that belonged to one of the neighbors, another time it was a raccoon trying to dig under the back fence at sundown, another time it was a bobcat who just hopped into the wrong property and didn't waste any time leaving when the donkey and his pack of 3 dogs and 10 cats came after it.
Keeping feed and pet food put up at night
I do not leave any feed in or near my chicken coops at night. I feed wet feed so there is not a bunch of loose feed scattered all over the place for rats, mice, and possums to feed on. I only feed my chickens enough so that they have food most of the day and finish off what is left before bed time (roosting time). If any food is left, I remove it. I also remove the feed dishes, wash them out and return them to their place.
Pick up eggs and wipe out nest boxes daily
I pick up my eggs every single day, leaving a fake egg in the nest boxes. Since I started doing this, skunks have stopped coming by every night around 9:30 pm and later. Foxes and other predators can smell eggs while snakes on the other hand will actually hear the heartbeat inside the egg after it has been in the nest for two days or more.
Cover the chicken scent
Keep your chicken coops clean. I use pine sol, moth balls, pine bedding or pdz pellets, and herbs,  something strong smelling to cover the smell of the chickens. I plant lilacs, lavender, oregano, thyme, garlic, rosemary, citronella plants. I also use herbs in their feed and nest boxes.
Predator aprons made from hardware cloth all around the coop
Yard Mirrors
​If a fox, raccoon, coyote or other predators sees it's reflection in a mirror it will think another predator is already there and leave. I place the mirrors about 12-15 inches off the ground. I use several and put them at different heights
Motion detecting cameras with sound
​Deer cameras with a flash
​The Fox is a chicken owners worst nightmare. They are sneaky and crafty, good at finding small holes and even digging at the hen house where there may be a small hole or loose board. They are adept at climbing and will look for weak spots in the walls, roof, and chicken wire. It is not uncommon for a mother fox to bring her babies to or near chicken coops teaching them to kill and eat eggs and chickens. The best ways to protect your chickens from a fox or foxes is to use fox traps, snares, electric fencing, lights, and make sure there is nothing that they can eat available, and no way to access the coop. . A determined fox will find a way in no matter what you  do, but most foxes will give up and find an easier source of food. However, if your place is on their regular walking route, they may check back time to time so never let your guard down. Keep in mind that if you see or catch one fox their are more foxes nearby so do not let your guard down. 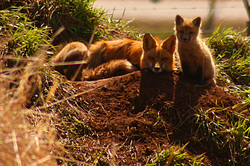 One temporary solution to stop a fox from killing your chickens is to feed the fox. Foxes eat chickens because they are hungry. Chickens are easy prey for a hungry fox. If you suspect you have a fox and do not have a trap yet. Set dog food out for the fox. If he eats the dog food his belly will get full and he will be less likely to attack your chickens. Canned dog food or dog food without the gravy tends to work best. Feeding the fox and their young will build their trust and make it easier to trap them later. Slowly move the food bowl closer to your trap every day until the food bowl is in the trap. Once you catch one fox you will need to move it to another spot and you will need to change the feed as foxes are quite smart.

Featured Video: How to Get Rid of Foxes & How to Deter Foxes UK-Catch it

If you see a female fox there may be several more baby foxes somewhere close by. The fox is considered nocturnal or a night-time hunter. However, if food is scarce they have been know to come out in the day time hunting for food. The best way to protect your chickens from a fox at night or early in the morning is to make sure they have a secure hen house and to set traps, snares, and use fox urine to deter them. If there is any way to get into your hen house a fox will find it! Generally a fox will hunt it's food in the wild. Chickens in the wild can jump into a tree or hide to get away from a fox but they have very little chance of survival once trapped in a hen house with a fox.. Once the fox is in, it is to late. Make sure that you secure your hen house. No loose boards or siding. Run hardware cloth 1-2 feet straight down buried into the ground all the way around your coop and run. No unlocked windows or doors. Small holes or loose boards can make it easier for the fox to enter.  Make sure doors are locked top and bottom, foxes have been known to pry a door open far enough to squeeze through so secure the coop doors  from top and bottom corners. Keep your chickens safe and have a blessed day.
​References: HOW TO GET RID OF FOXES & HOW TO DETER FOXES UK ~ CATCH-IT LTD. (2018). YouTube. Retrieved 29 June 2018, from https://www.youtube.com/watch?v=kLriN88ovSg