Best ways to protect your chickens from hawks and how to eliminate things that attract hawks. The best ways I have found to keep hawks away from chickens is to either have your chickens in a coop and run that is enclosed on all sides and has a covered top or to have a Bird X Ultrasonic bird repeller and scare balloons. Other options for deterring hawks are listed below.

Ways to Keep Hawks Away From your chickens 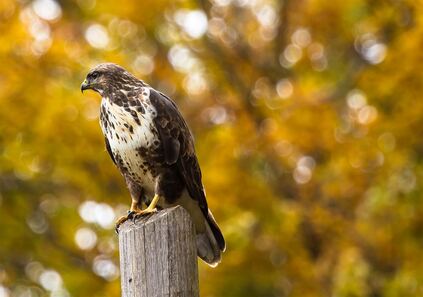 How to keep hawks away from your chickens. Falcon Photo by Alessandro La Becca on Unsplash
A chicken hawk is a wild bird that preys on mice, rats, rodents, and sometimes rabbits, and domestic birds with chickens being a possible food source for them but not usually as their primary choice of food. The best method to keep your chickens safe from chicken hawks  is to keep the area that they are allowed to roam freely covered with strong netting, hardware cloth, or chicken wire. One of these in combination with hen saddles (to offer some protection to your birds), night eyes or a hawk, crow, or owl decoy will deter even the bravest of hawks in most cases.  Scarecrows with moving parts and blinking eyes, or that move with the wind and other things that move, twirl, and glitter or light up and make sound can intimidate a hawk, if moved regularly.  I also use motion sensing sprinklers and ultrasonic repellents. Get rid of rodents and rabbits on your property and you will be removing the hawks primary food source. Put feeders inside a covered run where hawks cannot access them. Once the hawks realize they have no access to your chickens and their primary food source is gone they will move around to better hunting grounds. (Scroll down to see more ways).
UPDATE Sept. 20, 2018: Recently, I was given an extremely useful gift that has proven to keep hawks, raccoons, skunks, and coyotes away from my coop and I never have to move it, and...it really does work! I am not getting paid to advertise this product but I do want to share this with you because it amazed me too. It's pretty pricey and there is little chance I would have been able to afford it without saving up for a long time but I do plan to get another one as I have 2 acres of land. I had a pack of skunks residing on both sides of the property. By the second day in operation the Bird X Ultrason X Ultrasonic Bird Repeller had scared off every skunk on the property. I also had large rat snakes coming into the coop, raccoons, and coyotes as well as hawks. Even though I notice they don't advertise that the Bird X can do this, I can tell you, I have had it up on my chickens 3 bedroom trailer house for a month now and there has not been a single predator on the property. It does not bother my chickens, dogs, or cats. I will post another update on my progress with this product over a few months but so far, I can truly say I am impressed. See more ways I have and do use to keep hawks away below.

Use Hardware Cloth to cover Chicken Coops and Runs 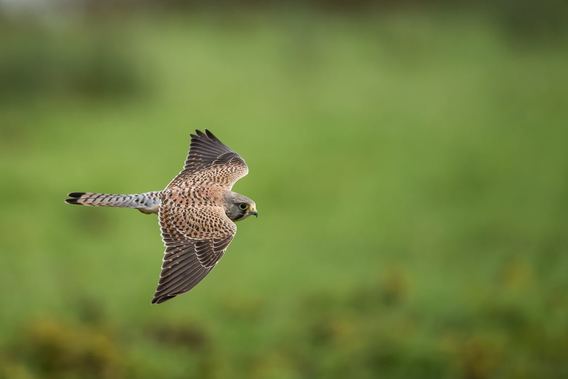 Flying Hawk Photo by Vincent van Zalinge on Unsplash
Install hardware cloth over the top, sides, and bottom of your coop and runs making sure there are not holes where hawks and other predators can get in. Hardware cloth or chicken wire will last longer than plastic poultry netting. The bad part of using hardware cloth is that it is usually the most expensive option for covering chicken runs unless you find a good deal or buy it used. The good part is that it will last many years and prevents any kind of predator from entering if used on all sides of the coop and run.

Use Poultry Netting to Protect Chickens From Hawks

Deer block netting is usually used to keep deer and your chickens out of your garden but can also be used to cover outdoor chicken runs in an emergency situation. It is not as secure as hardware cloth and can do little to protect your chickens from ground predators but does work well to protect your garden from deer. If you buy it out of season it is cheaper than buying it during deer hunting season. The bad part about deer blocking-If the holes on the deer netting are too large-a hawk can slip right through. The good part about the bright orange deer block netting-Hawks tend to be wary of it. Perhaps it is the bright coloring or the grid pattern that confuses them. It is usually stronger and lasts longer than regular poultry netting. 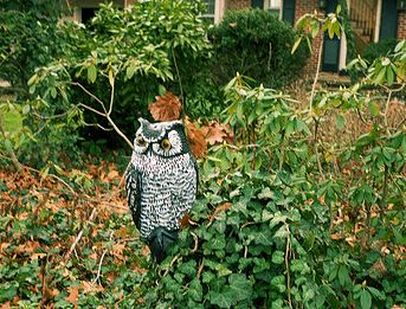 Fake owl
The owl is a natural enemy of chicken hawks. Using fake owls is a trick that may work to ward off a chicken hawk once, twice if you are lucky. Hawks are very observant and watchful. If the fake owl is stationary or moves only in one area the hawk quickly figures this out and no longer considers the fake owl as a threat. Moving the fake owl around to different areas when the hawk is not watching may help but has not been proven. Hawks are always watching-It's what they do. I have found that motion activated fake owls tend to frighten off the hawks more than ones that don't move but again, I frequently have to move it around to different locations.

Hen saddles are  special jackets which come in many colors and sizes that are specifically designed to camouflage your chickens so that the chicken hawk does not readily recognize them as a food source. Eyes can easily be sewn on the back of hen saddles and is said to confuse the hawks and they quickly search for other prey. Hen saddles can be used on roosters too. Shop Hen Saddles

Get Rid of the Hawks Primary Food Supply-Rodents 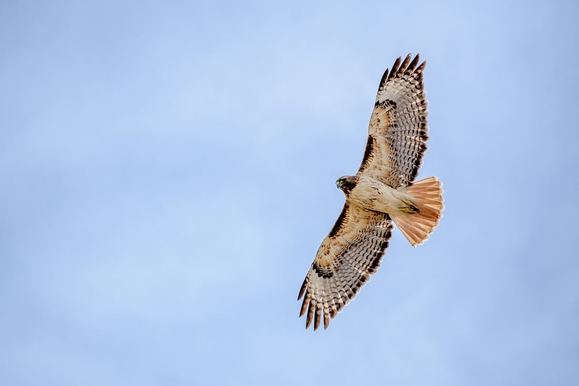 Photo by Steve Harvey on Unsplash
Chicken hawks have a primary food preference for mice, rats, and other rodents. By getting rid of these pesky critters  and covering your chickens so the hawk cannot get to them and the chicken hawk will usually move on the better hunting grounds. You can use sprays, poison, or traps to get rid of mice and rats but be careful to follow the directions carefully and do not use them where your chickens can get to them. Getting a kitten and raising it around your chickens is a huge deterrent to mice, rats, and other rodents not to mention the fact that most cats will eat rodents. Be careful to keep your baby chicks in a secure coop and run so your cat does not hunt them too. Rodent mesh works well to keep them out of chicken coops.

Plastic bags can be used to ward off hawks and owls by hanging them in trees and brush where the chickens play. The noise and movement that the bags make is said to keep the hawks away.

A good old fashioned scarecrow that has arms and legs that move easily or has strands of fabric or plastic hanging freely in the wind from it's arms and legs can frighten hawks away. Unfortunately, hawks are pretty smart and you will need to move the scarecrow from time to time. Once the hawk figures out the scarecrow never moves from it's place the hawks will simply circle around it. I do wish they would invent a motion activated scarecrow but I have not found one suitable as yet. Most scarecrows you can purchase don't hold up well to the weather elements. You can easily make your own scarecrow by nailing two thin boards together in a cross shape, stake it into the ground. Put clothes on it and stuff the clothes with hay.Use thick rubber bands or rope on the end of the arm sleeves and pant legs to keep the hay from falling out. Use a piece of white cloth or burlap to make a head and draw a face on it with water proof marker.