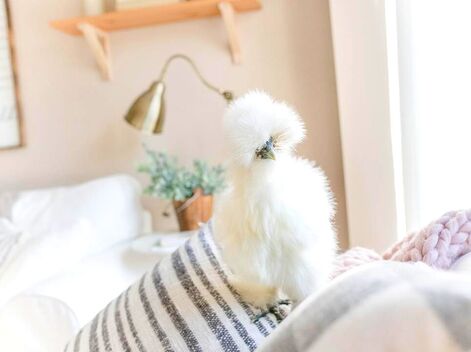 Silkie chicken photo courtesy of Paige Cody on Unsplash
I never knew chickens could purr until I rescued a Silkie Chicken I named Lady Silkie. After her examination, treatment for worms and mites I treated her to a Chicken Spa Day where she was bathed, trimmed and treated. After petting her and getting her tucked into a pet carrier for the night with fresh food, water and vitamins, I started to walk away from the carrier when I heard the strangest sound. A purring sound. I have several cats so at first I thought it was one of them but then I realized the sound was coming from this chicken. I have been taking care of chickens for many years and have never heard one purr like this. She sounded exactly like a very contented cat purring away. If someone would have told me that chickens could purr I would not have believed it. I started looking up everything I could find about chickens that purr and sure enough, many other chicken owners also have discovered that many chickens of different breeds actually purr when they are happy or content. See video below.