Everything you need to know about Americana/Araucana/Easter egger chickens (blue and green egg layers) from how they became rumpless, difference between Ameraucana, Araucana, and Easter Eggers, origin, size, egg size and color, broodiness, hardiness, history, and much more! 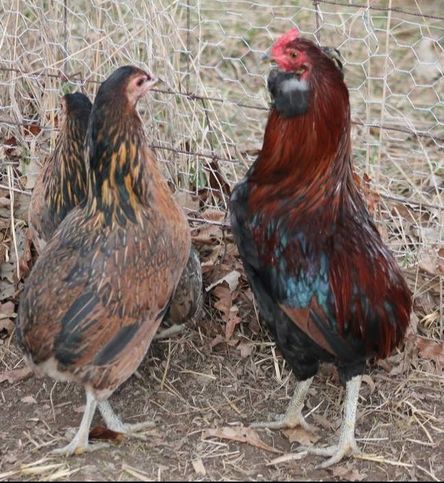 Rumpless Americauna Chickens hen (left) rooster(right). Lyon Oaks Farms (1)
The Ameraucana also confused with the Araucana and the Easter Egger chicken because these three breeds all lay blue or green eggs. These birds are usually very docile, do not care to be handled much, and can be skittish at times. Pure breeds make excellent show birds, particularly if they are rumpless Americana's. They are a hearty breed, mature early, go broody easily (occasional brooders), and do well in most climates.
Origin:
Ameraucana chickens were first discovered in Chile.  "The Quechua, was the parent stock from which the Ameraucanas were developed" (Henderson Breed Chart, 2).
Appearance: The traditional Americauna description by American standards has tufted facial feathers, tufts, a beard, and is rumpless (having no tail). However, in the UK and most other parts of the world the Araucana both birds with tails and rumpless are considered as acceptable (3).
Legs: Green or willow colored
​Comb:
Pea comb or straight and flat
Broodiness:
This bird is considered an occasional brooder. Most young hens will go broody if their nests are not disturbed. If you have already started to collect their eggs it is unlikely that they will go broody until a substantial clutch of eggs is accumulated (15-20). Not all hens go broody.
Size:
Standard: 5.5 lb/2.5 kg
Bantam: 1.6 lb/0.75 kg
Egg Size: Average
Egg Color: Various shades of blue & bluegreen
Hardiness: Very cold hardy
Confinement: Adaptable to confinement but do better free range.
Uses: Commonly used as a egg and meat bird.
Personality:Non aggressive but standoffish unless handled alot.
"Standardized & accepted into APA in 1984" (2).
​See Video and history of Americauna chickens, differences in blue egg laying hens, and Best Buys on Great Chicken Stuff Below.

"Rumplessness in chickens occurs when birds are missing the coccyx, or “Pope’s Nose”, from which the tail feathers emerge. This mutation is congenital and occurs from time to time in birds of all kinds. It is in inheritable, and in the case of chickens, may be caused by either a recessive or a dominant gene – the dominant gene being more common. In the United States, the only breeds of tailless fowl with any sort of documentable history of importation are the Araucana and the Persian Rumpless" (Livestock Conservancy, 4). 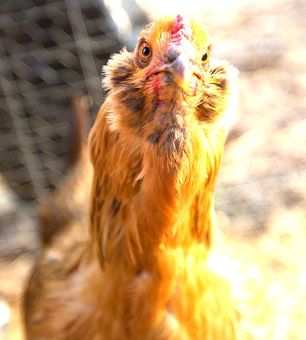 "In 1958 Dr. Albert McGraw got a start of Persian Rumpless chickens from Al Caldwell. Caldwell had gotten his start in the breed from a relative living in California, who had a Persian (Iraqi) neighbor. This Persian neighbor’s family had had the birds for at least three generations. The Caldwell birds were thus Persian Rumpless chickens. Due to the small population, introductions of other breeds were made (Araucana, Hamburg, and others). These outcrosses produced even more variability in plumage, comb, and type, and created many birds whose phenotype were a good approximation of that for the Manx Rumpy, a completely unrelated chicken breed from the Isle of Man. The name “Manx Rumpy” was chosen for those chickens in reference to the famous tailless Manx cat found on that island as well. Over time, the name “Manx Rumpy” was inadvertently applied to many lines of tailless birds in America. As the original Manx Rumpy chicken breed from the Isle of Mann has never been known to have been imported into America, the American population should be referred to as Persian Rumpless.

It is interesting to note that Craig Russell, President of the Society for the Preservation of Poultry Antiquities, shared that the original Caldwell birds occurred in several colors, but were largely only of duckwing in color patterns. Early drawings of Persian Rumpless seem to complement this observation. Mr. Russell also remarked that in the Caldwell flock, the rumpless gene was recessive in nature. Dr. McGraw has also noted that the original birds had a “wild look” about the eyes. Dr. McGraw further has noted seeing flocks on TV during broadcasts from the “Desert Storm War” in 1991; these flocks were observed in footage filmed near Baghdad" (Livestock Conservancy, 4).
Scroll down to see the differences between Ameraucana, Araucana, and Easter Egger chickens

Differences between the ​Ameraucana, Araucana, and Easter Eggers

Araucanas
Araucanas are a rare pure breed, recognized by APA since 1976.
Origin: Chile.
Usually sold only by breeders in the United States. The blue egg gene aka. ear tuft gene can make it hard to hatch eggs because this gene is deadly to developing embryos if both parents are carrying this gene. This breed comes in five colors-black, white, duckwing silver, and golden. They have a peacomb, ear tufts, red earlobes, are rumpless, have green or willow colored legs, yellow foot bottoms, and consistently lay blue eggs.
​
​Ameraucana chickens
Ameraucana chickens were ecognized by APA (American Poultry Association) since 1984.
Origin: Most likely South America but were developed and standardized in the United States.
​This breed comes in eight different colors. Black, white, duckwing silver, golden, blue, white, and wheaten. This breed has a peacomb, muffs and a beard, red earlobes, a tail, blue legs, white foot bottoms and consistently lays blue eggs.

Easter Egger Chickens
Easter Egger chickens are not a recognized breed by the APA as of 2017 because they are mongrel, mixed breed, hybrid chickens which do not have the blue egg gene and do not fully meet the APA breed specifications for neither the Araucanas or Ameraucanas and they can come in any color or combination of colors. This unrecognized breed can have any type of comb, may or may not have muffs, beard, or ear tufts, can have any color earlobes, can have a tail or be rumpless, can have any color les and foot bottoms. Egg color can vary between blue eggs, green, tan, pink and even yellow. (Steele, 5).
More Chicken Breeds
References:
1. Photo: Rumpless Americauna hen and rooster. Lyon Oaks Farm. Facebook. https://www.facebook.com/LyonOaksFarm/
2. Henderson's Breed Chart. Retrieved on April 15, 2017 from Sage hen farm. http://www.sagehenfarmlodi.com/chooks/hendersonschickenchart.pdf
3. Bowis, Tim and Jill. Utility chickens:Aracana's. Retrieved on April 15, 2017 from ​http://www.araucanas.co.uk/
4. Manx rumpy or Persian rumpless chicken. Retrieved on April 15, 2017 from Livestock Conservancy. https://livestockconservancy.org/index.php/heritage/internal/manx
5. Steele, Lisa. (Jan. 19, 2017). 3 Blue egg layers: Ameraucanas, Araucanas & Easter Egger Chickens. Countryside
​Daily. http://countrysidenetwork.com/daily/poultry/eggs-meat/ameraucanas-araucanas-and-easter-egg-chickens-the-blue-egg-layers/