How Chickens Get Marek's Disease 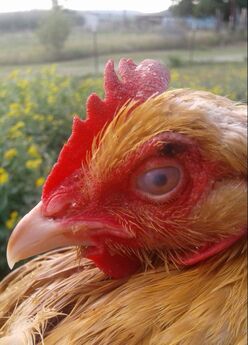 Image of early stages of Marek's Disease. CHOE
Marek's Disease is a virus that causes tumors in chickens. This disease is worldwide and most if not all chickens have been exposed to it even if they do not show symptoms of the virus. It is caused by 6 different herpes viruses which affect very young birds. It usually is in the base of the feather follicles and then is shed in the birds dander. This virus is spread by bird to bird contact and contact with infected dirty litter and dander. It can survive for many months in chicken coop litter and dust. Contrary to popular beliefs, Marek's is not spread by mosquitoes, mites, coccidia (a parasite that reproduces inside an animals cell) or by hatching eggs. Exposure to the disease usually comes from contaminated bedding, dust, dander, can travel through the air from nearby infected poultry houses, and can be transferred by contaminated personnel and equipment. Scroll down to see signs/symptoms/treatments and more.
Marek's Disease: An Evolving Problem (Biology of Animal Infections)

Signs of Marek's depends on which form of the disease is present.
​There are four forms of Mareks.

Newly hatched baby chicks have maternal protection from Marek's for the first few days of life. Immunization can be done in ovo (inside the egg -this is usually done by machine) or one day after hatching. Immunization can help prevent the chicks from contracting  Marek's during their lifetime.

Marek's disease morbidity and mortality rates are high in unvaccinated flocks. Morbidity (number affected) in unvaccinated flocks can reach 60 percent. Vaccinated flocks fare much better with less than 5 percent affected. Mortality in affected birds can travel quickly through the flock and reach nearly 100 percent over a 10-week period. Pullets are more likely to be affected than cockerels. Diagnosis is derived from the flock history, symptoms and necropsy (autopsy) findings.

How to Prevent Marek's Disease

Breed for resistance
Buy chicks that are vaccinated or vaccinate newly hatched chicks at one day old.
Good sanitation and ventilation.
Brood chicks separately from adults until 5 months of age.
Keep turkeys with chickens (this may help the chickens with Marek’s, but can lead to black head disease in the turkeys).
Vaccinate all chicks at 1 day old; keep chicks from exposure until immunity has developed, about 7 days.
Treatment for infected birds-No known treatment exists at this time.
​"Cull affected birds. Some birds develop temporary paralysis that disappears after 1-2 days. They appear to return to normal, but frequently die from internal tumors a short time later" (University of New Hampshire Coop Extension, 2017).
​​https://extension.unh.edu/Agriculture/Dairy-Livestock-Poultry 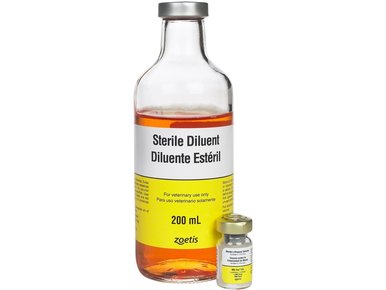 "MD-Vac CFL is recommended for the vaccination of healthy one-day-old chicks only, to aid in the prevention of the signs and lesions of Marek’s disease .For vaccination, an automatic syringe with 22- to 20-gauge needles, 3/8-inch to 1/2-inch in length, is recommended. Make certain that all equipment is sterilized and change needles frequently. Inject each chick subcutaneously with 0.2 ml prepared vaccine. Live virus; requires mixing" (Valley Vet Supply, 2017).
​https://www.valleyvet.com/ct_detail.html?pgguid=0a374926-e913-44e0-9eb3-4de559b5efaa