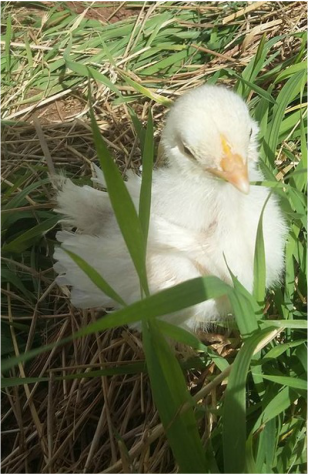 Lil' Snowball
When Mr. Snowie had to choose a wife, he clearly favored Lady Frizzle when he was asked to make a choice. Mr. Snowie was brought to us years ago as an unwanted Easter chick, due to his sweet patient personality, handsome white cochin bantam good looks, and his obvious skill at charming the ladies while avoiding fights with larger roosters, we decided to make him the start of Chicken Heaven On Earth's Private Stock. Lady Frizzle was brought to us after being rescued by someone who tried to help her but she was attacked by a skunk while trying to hatch her first brood of chicks (before she met Mr. Snowie), hanging on for dear life, she came to us beaten and depressed from the loss of her babies to the brutal skunk attack that left her battered beyond recognition. However, we took her in and she received the very best care we have to offer and Lady Frizzle made a complete recovery. Though her physical wounds had healed, it took time to get her spirits back up, she sat around looking sad most of the time, and then she met a little red Frizzle hen named Babygirl. Lady Frizzle and Babygirl did everything together, they walked around together, laid eggs together in the same nest box, and even took dirt baths together. 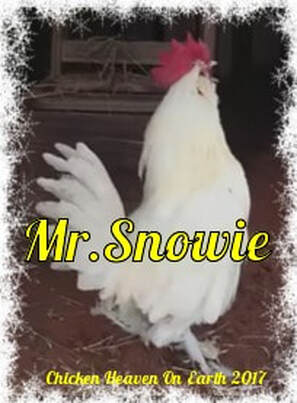 Meanwhile, Mr. Snowie watched them, always standing nearby, seeking out treats for his fine lady friends. Both ladies were enamored of Mr. Snowie but neither wanted to share him. This put a wedge between the two lady hens. They began to fight when he was around. Fearing one would be harmed, I told Mr. Snowie he needed to choose one for a wife. He looked right at me, cocked his head and nodded as if he understood me. Later that afternoon, Lady Frizzle & Babygirl seemed to have made up from their spat and were walking around with Mr. Snowie, both decided it was time for a dirt bath. During their dirt bath Snowie clearly chose Lady Frizzle as his Lady and Babygirl soon became enamored herself to a male red frizzle bantam and lost interest in Mr. Snowie. Mr. Snowie then courted Lady Frizzle as roosters do and it was only a matter of time and Lady Frizzle went broody. We watched and counted the days as they went by but no baby chick was hatched. I threw away the rotten eggs and I could see how distressed she became. Again she went broody, sitting on her eggs with a fierce determination to hatch one. Realizing she needed assistance, I took one of the eggs and put it under a broody hen named Ms. Vanilla. She was sitting on only one egg and when I brought their egg to her, she pushed it underneath her. Ms. Vanilla hatched her egg but steadily stayed on the nest and hatched Mr. Snowie and Lady Frizzles egg. After she hatched it, Ms. Vanilla took her baby chick and left the nest, leaving the tiny white frizzle baby peeping loudly. I waited to see if she would care for it but by evening it was obvious she was not going to do it. When I reached for the chick, Ms. Vanilla just looked at me, as if to say, "It's your funny looking kid-you take care of it" and she made no move to stop me. I was so happy to have the chick and cupped it in my hand. As night fall was fast approaching, I rushed to Mr. Snowie and Lady Frizzle. I slipped the tiny chick under her and waited. She did not seem to notice that it was there. I watched for hours but there was no sound from the chick, assuming and hoping it was asleep, I went to bed myself. I rose early and watched with anticipation. Lady Frizzle had discovered the chick and seemed no wiser that she had not hatched it. Mr. Snowie crowed for hours bragging to the flock and stood by the nest, after a few days Lady Frizzle knew the chick was hungry and brought it to their food and water dishes. The chick was wobbly legged and tiny. Within an hour it became obvious I would need to remove Mr. Snowie from their private coop (just in case). I put him in a cage in their coop and the baby chick thrived. Lady Frizzle seemed thrilled to finally have a baby of her own. The nights started to grow cold and Lady Frizzle brought the chick to me. I brought them in the house and watched with joy, as she led the tiny chick around. I bring her and the chick to Mr. Snowie every day...the rest of the story is on our video series of Lil' Snowball. Lady Frizzle has gone broody again but this time she doesn't seem depressed...wondering if I need to help her again. Meanwhile, meet Lil Snowball (below)....

I knew right away this little chick was going to be spoiled rotten. Here I am trying to get her to eat some scrambled eggs before I gave up and tucked her under her Mommy Lady Frizzle (see more about Lady Frizzle below)
Lady Frizzle's Rescue