Poultry DRinking water cups-Easy Ways to Use Them

This is how i use poultry water drinking cups 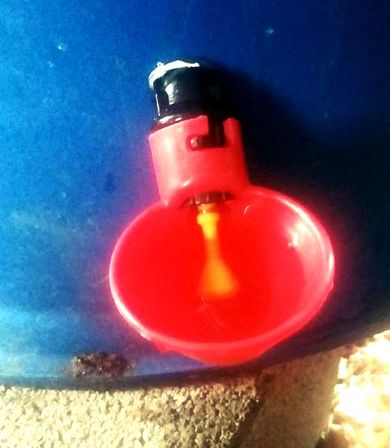 Using poultry drinking water cups is one of the easiest and most affordable ways to set up a water drinking system for your chickens! Takes only minutes to connect to a plastic barrel, bucket or pvc water line. You will need plumbers tape to seal the threads, a drill, a 3/8" inch drill bit. Drill the hole, wrap the threads, twist it into the hole until snug..it's just that simple.
The white ring you see in the photo is plumbers tape to help prevent leaks. When the water cup runs out of water the chickens can tap the yellow piece in the center and water will fill up the cup again. Using this method prevents water spillage into soiled bedding which is common around the more traditional poultry water containers. Water spills around the water fountain into dirty litter is one of the leading causes of coccidosis in chickens which can make your birds very sick and even kill them if left untreated.
​Update: I have since upgraded my poultry cups to automatic poultry water cups with a float and they work much better than the style in the photo. The chickens don't have to figure them out, the cups stay full all the time, and they do not need to be replaced as often. 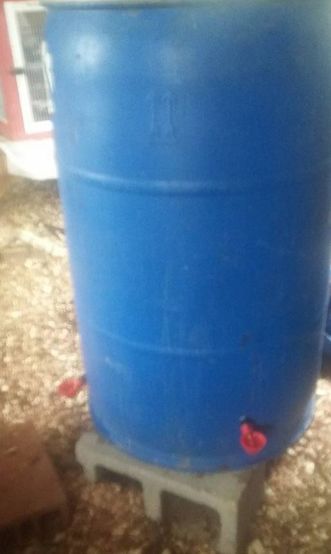 I used a 55 gallon plastic barrel with a snug lid because I have more than 100 chickens who go through water pretty quick in the summer months but you can easily connect this to a smaller plastic bucket.
​I used 5 gallon plastic buckets for my smaller coops. I keep several in my chicken coop and the one's I have outdoors I made small sheds around them with three sides with tin for the walls and roof covering it. This prevents junk from trees and brush from getting into the water cups,plus it prevents sunlight from heating the water or turning the water green. I turn the mini water sheds, away from the North wind to block it from the waterer in the winter giving me a better chance that the water will not freeze in cold months. I live in Texas so that might not work in colder climates. I plan to use a pvc pipe watering system in the very near future.
Why I switched from traditional chicken water drinkers to poultry drinking water cups
One of my main issues with standard chicken water drinkers was that debris would get in the troughs (even tho my waterers are inside the coop) and even worse water would get splashed into the bedding on the floor boards. My chickens would then drink the spilled water that splashed out. This was causing the birds to get sick with coccidiosis even tho, I cleaned the water drinkers daily, scooped the soiled bedding and put fresh bedding down around all the water containers. By the time I figured out what was wrong several chickens had died. Since installing the poultry drinker cups and treating my birds for coccidiosis, none of the chickens have been sick anymore.
Update: I have had some problems with the floats in the style water cups shown in the photos and have had to replace the cups several times now and have found new models of Automatic Premium Chicken Waterer Cups with mounting hardware and RentACoop Automatic Chicken Water Cups which both style water cups fill up on their own and can be used on any size bucket and that have been working for months now with no overflows and no faulty cups. I am so impressed, watering chores are much easier now and I don't have to worry about dirty water or the birds running out of fresh water on a hot day.
Scroll down to see our featured video, poultry drinking water guidelines, and more ways I use these awesome chicken waterers. 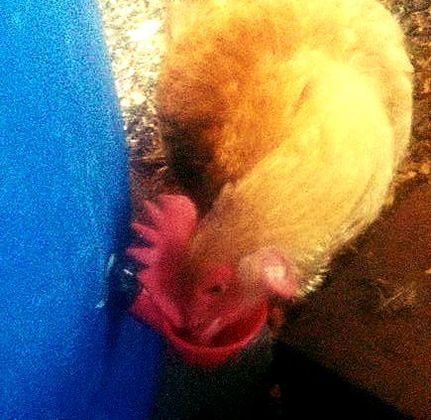 I waited until evening when all the birds were roosting and then I showed them how to fill up the cup by tapping the yellow float. Then I took the younger birds and dipped their beaks into the water. After I dipped the tip of my pullets beaks into the cups and they realized this was a water source, they started drinking it on their own. I tapped the yellow float several times again, so they could see how it filled up and they caught on in minutes while my older hens were wary at first and stayed back. They resorted to the old water containers which were still available to them. I left the old drinkers in the coop for a few hours and then pulled all water sources except the one's with the water cups in the morning and by evening when I put the chickens to bed they were all lining up to get their turn. I have since installed 3 more barrels and several 5 gallon buckets with poultry drinker cups in my coops. My cedar and pine bedding around my water drinker barrel stays dry and my chickens are getting fresh, clean, cool water. See more ways I use poultry water drinking cups below. 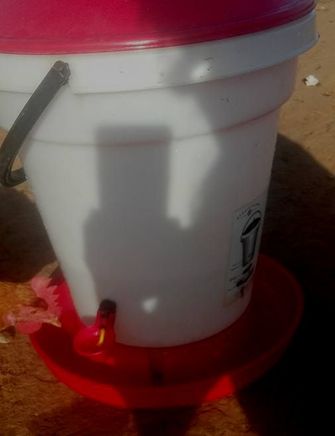 I spent $40.00 on this Easy fill poultry water drinker and in two months the float wouldn't work. I was able to fix it twice according to the directions but the 3rd time, it would not work no matter what I did. The water just kept pouring out. I bought some poultry drinker cups and put one on it and as you can see, it clearly worked. It took my chickens less than 2 minutes to figure out the water was in the cup and not the trough. 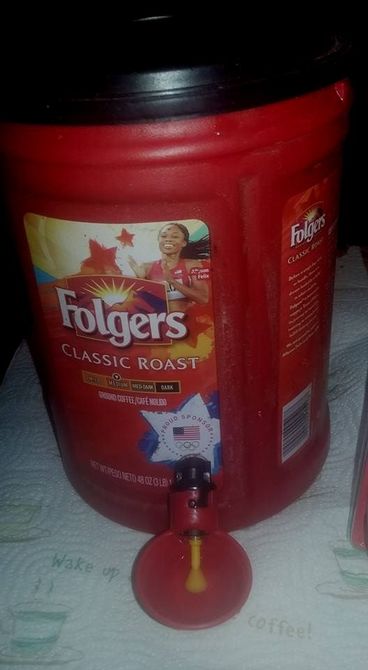 Featured Video: How to Make a Chicken Waterer Using a 5 Gallon Bucket

Before I attempted my own watering cup barrel I was sitting on the couch thinking to myself, it could not be as simple as the directions on the package were saying, so I looked on Youtube to find a demonstration video and sure enough, I located a video which was clear, easy to understand and which would simply show me how to do it. This video fit the bill. Easy to understand with clear precise directions.  Check it out.

I also have neat ways of using poultry nipples! Check them out! 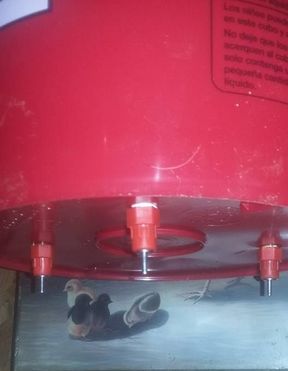 Click photo to see how to put nipples on a 5 gallon bucket.
This is a photo of a 5 gallon bucket I put poultry water nipples on. This was the cheapest method of making a waterer and it was very easy to do. Like the poultry cups, I had to drill a hole, then screw in the nipples with plumbers tape. I did not have much luck with them.  Only a few of the chickens figured out there was water in the nipples so I still had to provide alternate waterers. I had hung the bucket which was a bad mistake because the second time I refilled it, the handle bent, the bucket fell and the nipples punctured into the bucket-ruining it. I bought the bucket at Tractor Supply but have since switched to old paint buckets because they are much stronger and 55 gallon Food grade blue barrels with poultry cups that have automatic floats. I no longer depend on the metal handles on five gallon buckets, I have found that if I drill a hole on all four sides an inch or so from the top, I can put heavy duty wire or rope through the holes and then hang the buckets. Now that I have poultry cups, I no longer have to hang the buckets because I simply drill the holes for the cups high enough from the bottom of the bucket (approx. 3-4 inches) and insert the cups. I then set the bucket on the floor or for deep litter coops I put the bucket on haddock blocks. Check out ways to use poultry water nipples here: Go to Ways to Use Poultry Water Nipples

I have successfully been using the poultry drinking cups on big 50 gallon barrels for almost a year and have only one major complication. I came into the hen house to find water leaking all over the place, this was not good and it happened on two different occasions. The first time it was because the tiny rubber seal ring that comes with the drinker cups is inferior and needs replacing. The second time it was because the chickens were turning the cups over. I took the cup to my local hardware store and they were able to locate a tiny black rubber washer that fit the poultry drinking cup. I then purchased silicone water seal for aquariums. I removed the old damaged seal and replaced it with the black rubber washers. I put a line of the silicone aquarium sealer around the cup threads and behind the rubber washers. Viola, this has solved the problem. To ensure that my birds wouldn't turn the cups over on my new water barrels I made the holes close to the bottom of the barrel so the poultry water cups actually sit on the floor (or the ground for outside waterers). So far, so good, it has been 3 months now with no overturned cups and no leaks. I have a friend who uses my poultry cup barrel idea and he added a little security to his by putting a grommet eyelet on the outside of the barrel. He tells me it is working to prevent overturned cups-so far. I may try this too.-Update Dec. 12, 2017.

I have safely used non toxic aquarium sealant on the threads of my poultry cups and around the drilled opening. I used my finger to spread it thin at the opening  so the chickens would have nothing to peck at.

Scientific studies show that the quality of drinking water your chickens are consuming can effect their overall appearance, performance, and health. Check out these important factors. Go to Poultry Watering Guidelines
Poultry Drinking Water Guidelines >>>

How to Water Chickens

Chickens need access to fresh, clean water, uncontaminated by feces, bedding or other foriegn matter. Water should be clear and have no green in it. Put water containers in a shady area as sunlight will cause the water to turn green and green water or contaminated water can make your chickens sick. Go to How to water your chickens
How to Water chickens >>>
References: ​Video. How to make a chicken waterer using a 5 gallon bucket. (May 9, 2016). Home owner repair. Youtube.com. https://www.youtube.com/watch?v=yE1Pc6dGlPI&index=2&list=PLBYQPSHwhzg6TW6EIHA85c-gdaWmyTrKh