Reasons to Adopt
​A Rooster

Roosters need homes. It seems everyone wants hens especially with the recent trend in raising backyard chickens. Many towns do not allow roosters inside city limits. It is natural for hens to have a rooster to guide, court, and protect them. People fight them and care nothing for the harm it causes the poor birds, commercial egg industries gas them and sanctuaries like ours-rescue them. Yes, roosters need homes where people love them just like hens do. 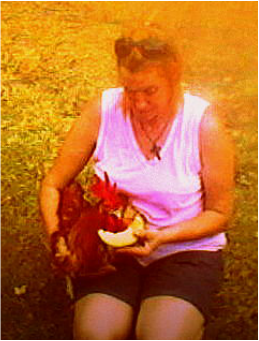 Rooster's need homes because they are in danger from commercial egg production facilities who kill them as baby chicks, and because they are  friendly if trained and handled from a early age, learn quickly and are great 'watch dogs'.
The number one reason to adopt a rooster is:Rooster's are in danger from commercial egg production facilities because they do not need rooster's as they do not lay eggs so they throw them in a barrel still alive, piled on top of each other to be gassed to death sometimes after several days of suffering.
Rooster's learn very quickly and if domesticated while still young will develop a close attachment to their owner and become very protective of them.
Rooster's like to be petted and complimented
Rooster's are like an alarm clock and will crow when the sun rises
Rooster's are great insect control because they eat unwanted insects.
Rooster's eat table scraps that would normally be thrown in the trash which saves tax payer dollar's on waste management costs.
Rooster's will warn their owner's of prowler's, burglers, and guests arrival at your home.
Rooster's used in commercial egg production need homes instead of being gassed to death while piled atop one another in huge barrels.
Adoption may be the only alternative to save rooster's. Some commercial egg producer's and hatcheries sell them to stores at Easter time in the hopes that someone will adopt them and keep them as pets. Sadly, this usually only happens around the Easter holiday. The rest of the time the male baby chicks are thrown into huge barrels and gassed-sometimes days later.
Roosters need someone who will spend time with them, petting them, teaching them. Someone who can give him some pretty hens to protect and a safe place to live. Someone who will accept his protective dominant male personality, sometimes cantankerous attitudes, his charming antics, but most of all someone that will love him just the way he is.
More About Roosters